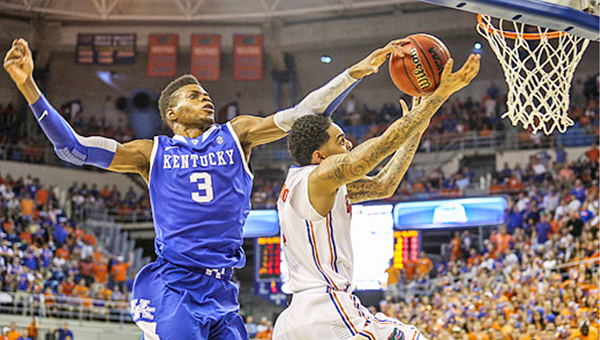 Kentucky’s Nerlens Noel (3) is considered to be the No. 1 selection in Thursday’s NBA draft. (MCT Direct Photo)

Good but not great.

“There are some guys who if they find the right fit who can be a good player,” said Burcham. “Next year will be the stud draft. There aren’t any franchise changers this year.”

Many draft prognosticators and scouts have made their lists and ranked players according to talent and needs. Burcham wasn’t in total agreement.

“There are some players who will go later in the draft that I think are better suited to contribute and be good players,” said Burcham.

The draft will be televised by ESPN beginning at 7:30 p.m. Thursday. Here is a list of the first round in Burcham’s mock draft.

1. Cleveland: The Cavs would like to trade this pick to Minnesota for Kevin Love. If they keep the pick, they have four guys they could take but they will probably go with Nerlens Noel, 7-0, C, Kentucky.

2. Orlando: They need everything. They are better inside than outside. It’s between two guards and I think they feel more confident in Victor Oladipo, 6-4, SG, Indiana. Great defensive player. Great motor.

3. Washington: They take Otto Porter, 6-9, SF, Georgetown. He fits perfect at the small forward for them. He’s the most NBA ready.

4. Charlotte: Whomever they take won’t pan out. It’s been their history. They have no big guy inside, so they go with Alex Len, 7-1, C, Maryland.

7. Sacramento: This could be anything. The guess here is Anthony Bennett, 6-8, F, UNLV. This is one of my favorite guys in the draft. He can do a lot of things.

8, Detroit: They are hoping for Burke, but if not they take Michael Carter-Williams, 6-6, PG, Syracuse. He can play either guard spot.

11. Philadelphia: Steven Adams, 7-0, C, Pittsburgh. I think this guy will be the first big bust of the draft.

12. Oklahoma City: They take Kentavious Caldwell-Pope, 6-6, SG, Georgia. He’s a good athlete with a quick release who can shoot.

13. Dallas: They tried to trade this pick to free up cap space. If they take someone, they take a point guard, Shane Larkin, 6-0, PG, Miami, Fla. They could make a pick and send them overseas for a year.

15. Milwaukee: Jamal Franklin, 6-6, SG, San Diego State. He’s one of my favorite players in the draft.

16. Boston: Gorgui Dieng, 6-11, C, Louisville. I like him, too. He’s one of my three favorite players in the draft along with Franklin and Bennett.

19. Cleveland: If they take a center with the first pick, they take a small forward. Sergey Karasey, 6-7, SF, Russia. He’s only 19 and he can flat shoot.

20. Chicago: Tony Mitchell, 6-9, PF, North Texas. He started at Missouri and got kicked off the team. They call him a freak of an athlete.

21. Utah: They will take a chance and take Giannis Adetokundo, 6-9, SF, Greece. He can handle the ball for a big man.

23. Indiana: Reggie Bullock, 6-7, SF, North Carolina. With Danny Granger not being able to come back, Bullock can shoot the 3’s and fits their system.

26. Minnesota: They need as many shooters as they can get. Glen Rice Jr. 6-6, SF, Georgia Tech. He played in the D-League last year and scored a lot of points.

27. Denver: Ricky Ledo, 6-6, SG, Providence. He had issues and wasn’t eligible last year, but he can play. He could be one of those steals in the draft.

28. San Antonio: Rudy Gobert, 7-2, C, France. They’re pretty set in the backcourt, but they need another guy up front.

29. Oklahoma City: If they get the guard earlier, they go with Jeff Withey, 7-1, C, Kansas. He’s athletic and a great defender. He blocks a lot of shots.