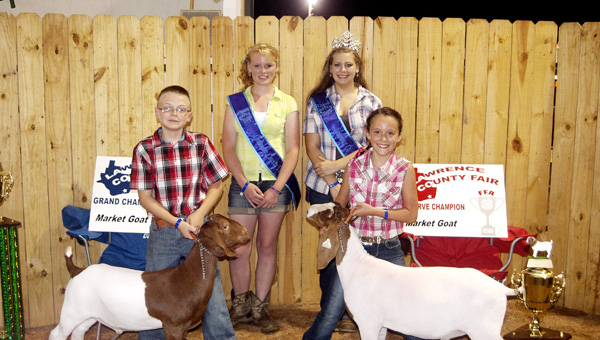 ROME TOWNSHIP — There were eight classes of goats Monday night with plenty of veteran 4-Hers showing off their market animals.

But it was two first-timers who took the grand and reserve champion titles at the market goat show at the Lawrence County Fair.

Doug Bailey, this year’s judge, stood with his arms folded as he gave a last look at the class winners. The long-time livestock judge knew what he was looking for: good muscle tone, thick ribs and loins and a wide hip.

Daniel Mootz, 10, with the Starlite 4-H club, came out on top, taking the grand champion trophy.

This was Mootz’s first year showing an animal at the fair and he said getting his goat ready was no easy task.

“I think the hardest part of raising a goat is it’s a lot of work,” Mootz said. “You have to feed and water them a lot. And get them exercised.”

Lauren Wells, 9, of the Arabia All-Stars 4-H club, agreed that goats are a lot of work to raise.

“Having to walk them every night,” Well said.

Wells took the reserve champion title for her first show ever at the fair. She almost came to tears when she was awarded the trophy.

“I was like, I thought I would get, like, third,” Wells said, still surprised. “He (the goat) wouldn’t behave.”

Both Mootz and Wells will be in top position at Saturday’s large market animal sale. The sale begins at 10 a.m. in the livestock arena.

Just because children are out of school for the summer doesn’t mean the learning should end. In fact it is... read more