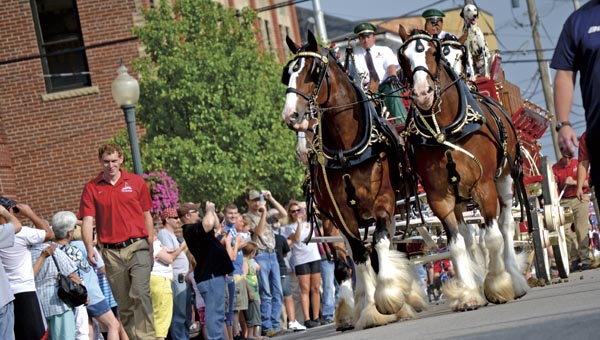 Three double-wide vans splashed in Budweiser red inched down Park Avenue about 5 p.m. Thursday. Gingerly they made the turn onto Bobby Bare Boulevard stopping in front of a crowd lining the street five deep.

Mute, the makeshift audience watched as the first van door was slung open revealing two of the placid giants everyone had come to see. Budweiser’s iconic Clydesdales had come to Ironton.

All that was visible inside the van were the white tufted legs of the breed the Anheuser-Busch brewer once used to pull its beer carts. The legs ended in hooves whose diameter seemed to dwarf a man’s head. Six handlers — five men and one woman — dressed in matching red shirts, got out. A steel ramp was pulled down and one handler backed down a small golf cart.

Another van door was pulled open and the heads of two more horses could be seen, nuzzling each other, harnesses jingling as the crowd’s talk got louder and louder.

Next the massive beer cart was brought out, its wheels of gold and white spikes shining in the afternoon sun.

Jon Ferguson, president of the Ironton aLive, remembered the last time the Clydesdale came to town. That was 30 years ago.

“I just looked at them in amazement,” Ferguson said. “This is like a comet. You get to see it once in a lifetime.”

Handlers massaged the carriage with plush purple cloths, wiping away any dust from the vans.

Ironton was the first stop for the horses, in the Tri-State here as part of a ceremony to honor one of the three distributing companies that make up the Triple Crown Beverage Group that includes Spriggs Distributing Company in Ironton. Its sister company, Eagle Distributing of Ashland, Ky., was receiving Anheuser’s Ambassador of Excellence Award.

Handlers kept looking at the skies as blue-gray clouds blocked out the horizon.

“If there is one drop of rain, this is over,” Nick Williams, general manager of Triple Crown Beverage, said.

These animals are that pampered.

Then the first star of the day was walked down the steel ramp, now covered in a brown rug. It was Greg, the anchor horse for the day, and the Clydesdale most remembered for his role in the 911 Budweiser commercial.

A brush was rubbed over the animal just before a black leather collar trimmed in brass was pulled over his head. The routine so familiar to the animal, he stretched out his neck to help the handler ease the collar on. More tack was strapped on, then the animal was led over to the carriage and hooked up.

With the precision of a military campaign or the choreography of Swan Lake, each animal was brought out to be groomed and tacked.

As the fourth horse was hitched, the sun began to overwhelm the gray clouds. There will be showtime.

Four more times the handlers went through the drill as the hitched up horses waited patiently, occasionally bobbing their heads in a silent chorus or chewing on their bits.

Just as the next to last horse was hooked up, one of the handlers climbed up on the 5-foot-high rig and untied the reins looped under the seat. There he waited until the last horse was tied in.

Then he jumped down and the two drivers for the day, dressed in white shirts, green pants and green caps of the beer drivers of olden days, took his place. The crowd waited snapping photos with Canons and cell phones.

One more step was left, a driver reached down to pull up Brewer, the Budweiser Dalmatian, onto the rig, who settled down next to the two men.

Then with a slight flick of the reins the eight Clydesdales glided down the boulevard onto Vernon Street to Third Street up to Center Street and down Fourth Street to the Ro-Na Theater parking lot.

Crowds chased the wagon, running into the streets ahead of it to watch one of the most known symbols of the Budweiser brand in flesh and blood.

At the parking lot the crowd got its chance to get up close, standing in front of the lead horses as family or friends snapped away. Fielding questions were the handlers, one of whom hasn’t been along that long for the ride.

Alex Robertson has only been with the Clydesdale tours since January, but he sees it as a dream job.

“It is everything,” he said. “You get to go to so many different places and work with these big beautiful horses, so gentle, so docile. It’s awesome.”