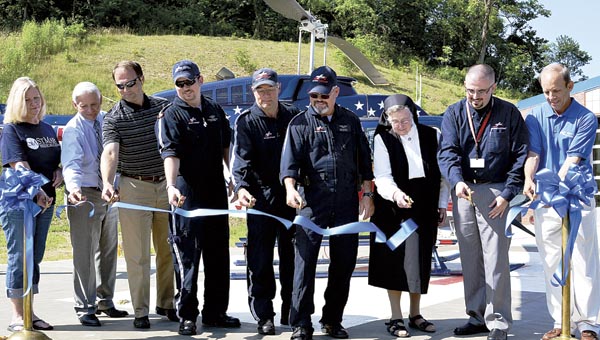 A year has passed since St. Mary’s Medical Center responded to an oft-expressed desire for Ironton to have a hospital again within its city limits.

More than 10 years ago River Valley Health Systems, once known as Lawrence County General Hospital, closed its doors. But in July of 2012, St. Mary’s opened its Ironton Campus with a state-of-the-art, world-class emergency and trauma center.

To mark the one-year anniversary and thank the community for its support St. Mary’s hosted a special appreciation day on Saturday. Tied with that was a ribbon cutting as part of the dedication of the newest member of the St. Mary’s team — Air Evac emergency helicopter service.

“When we wanted this to be a full-service emergency room campus, we knew air flight was critical,” Tim Parnell, vice president of support services at St. Mary’s, told an audience before the ribbon cutting. “You see a state-of-the-art hangar here. This is an asset to the entire community. We look forward to growing our services here.”

As its first year of serving patients in Lawrence County ended, other community leaders at the anniversary celebration praised St. Mary’s outreach at the ceremony.

“This is a great day commemorating the year this campus has been up and running,” said D.R. Gossett, executive director of the Ironton-Lawrence County Community Action Organization, one of several partners in the creation of the new facility.

“This is a fabulous emergency room, trauma center and world class center.”

Dr. Bill Dingus, executive director of the Lawrence Economic Development Corporation, praised the community teamwork that brought the idea of an Ironton campus into a reality.

“This is people working together realizing they had a need, uniting and solving that need,” Dingus said.

About two years ago Lawrence County received a state ranking that placed it last in the 88 counties in the state as far as the health of its residents. Recently that rating went up several points. Commission President Bill Pratt commenting earlier in the week attributes part of the improvement to the existence of St. Mary’s in Ironton.

“I think it was a fantastic achievement to have built that facility and now to add the Air Evac. It has made Lawrence County a much safer place to be and improved our health rankings.”