Ironton’s late, great get chance to tell their tales 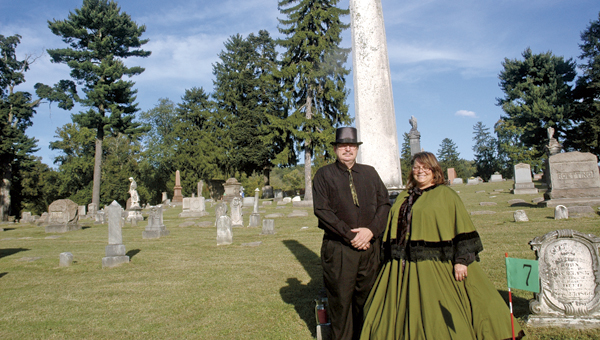 Once a year the onetime second richest woman in the world pops out of her marble mausoleum with its tuberose stained glass windows to play hostess to the crowd.

“I am glad to be out,” Nannie Kelley Wright, aka Kay Rader, told this year’s visitors to the Historical Walk at Woodland Cemetery on Saturday. “I only get to come out once a year.”

And with that, Rader was off telling the story of the woman who made a fortune in the pig iron industry, then lost it in the Wall Street Market Crash of 1929.

“Fortunately, I still had all my diamonds,” Rader said. “When I died, Mim Grimes wrote my obituary and in it she said that I lived a life of bold adventure. And you know she was right.”

For more than a decade, members of the Lawrence County Historical Society and community volunteers have put on the walk, dressing up in costume to portray the lives of those who put Ironton and Lawrence County on the map.

There was Charles and Harriet Kingsbury, portrayed by Ray and Julia Jones. Kingsbury was Ironton’s first public school superintendent serving from 1851 to 1865 and so revered by his students and community that they erected a monument to him in the cemetery. Their daughter donated her home, the Burr Mansion, to the Briggs Lawrence Library, which used it for its headquarters until it was torn down.

Bob Long, portraying the World War I ace, Col William Lambert, told of Lambert’s war record and his years as a barnstormer. Bob and Cheryl Cleary brought back their recreation of the life of Dr. Joseph and Sarah Jane Lowery, while Carol Pennington and Martin Smith told the story of Lowery’s brother, Andrew Clark and his wife, Nellie Marting.

This was the first time for 13-year-old Higgins to be part of the historical walk and found he was adapting to the experience.

KITTS HILL — A fire in the building that houses the Kitts Hill Post Office destroyed much of an apartment... read more