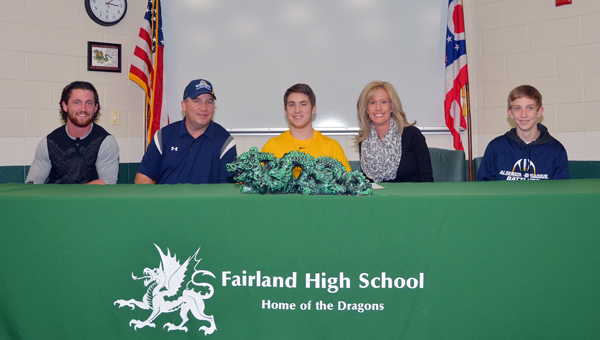 PROCTORVILLE — For Fairland’s Kyle Sowards, not much has changed.

The senior wide receiver sees a lot of similarities between his current situation and with his future home after he signed with the Alderson-Broaddus Battlers Wednesday.

Sowards said A-B’s hometown of Philippi, W.Va., and the football program both remind him of home.

“Their offense is a lot like ours. They spread it out and throw the ball a lot. They threw the ball the most out of everyone in their conference last year. They averaged almost 300 passing yards a game so I felt like it would be good for me,” said Sowards.

Sowards selected Alderson-Broaddus over the University of Charleston, Ohio Dominican, Ohio Northern, University of Pikeville and Ohio Wesleyan as well as several other smaller programs.

The Battlers are a NCAA Division II program that restarted their varsity program in 2013 after an 80-year hiatus. Alderson-Broaddus finished 4-7.

“They’re just getting started and I felt I have a good chance to go play there. They gave me the best offer and I just liked it there. It was like home,” said Sowards.

Sowards had a breakout season for the Dragons who went 7-4, won the Ohio Valley Conference title and qualified for the Division V playoffs.

“From what their coaches have told me, I’m going to get some playing time next year. They said I just need to get bigger, faster, stronger. That’s what everybody needs,” said Sowards.

“I saw them play one game. I saw them play the NAIA nation runner-up the University of the Cumberlands (Ky.) and they were a tough team. (A-B) are much younger, but they look like they have a promising future,” said Sowards.

Sowards plans to major in engineering.