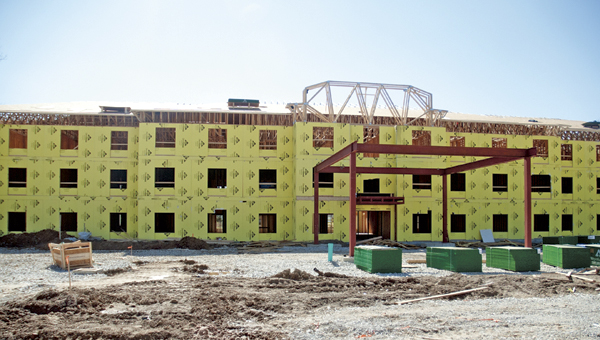 Winter weather lasting until late March has slightly hampered construction of the Gateway Project’s hotel and restaurant planned for the site on Ninth Street in Ironton.

Investor in the hotel and restaurant venture Jim Kratzenburg said the hotel is about two weeks behind, but with the weather’s turn for the better that span can be made up quickly.

“With good weather we can make up the lost time,” he said. “It will still open by the first of October unless something drastic pushes it back.”

The roof of the 79-room Holiday Inn Express and Suites was set for completion on Tuesday and the hotel’s 24-hour pool and Jacuzzi have been constructed. The hotel is being built by MPH Hotels (MPH) of St. Petersburg, Fla. MPH has constructed more than 150 hotels in the United States.

The 5,500 square foot 172-seat Frisch’s Big Boy is modeled after the company’s largest schematic and will open in early June.

“The walls for the Big Boy will be up on Friday,” Kratzenburg said. “It’s the biggest restaurant the company offers and its construction is moving along.”

The Big Boy will feature a conference room equipped with Internet and electronics to use for presentations.

“It will be the type of room the Rotary and other clubs like that can use,” Kratzenburg said. “It is free to use as long as the people using it are ordering food.”

Drug take back day will be later this month