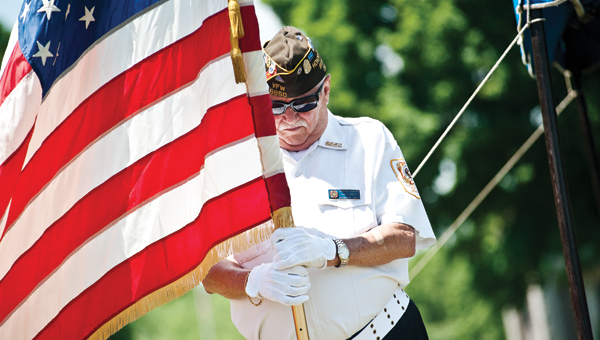 Bennie Blankenship held the American flag with his head bowed during the invocation at the Veterans Memorial Service at Woodland Cemetery Sunday afternoon.

Today the people of Ironton and Lawrence County will celebrate veterans with the 146th annual Memorial Day parade.

Sunday, however, was a day of remembrance as people gathered at the Soldiers Plot at Woodland Cemetery for the Veterans Memorial Service.

Hundreds of American flags marked the graves of the service members who answered the call to defend the country, some paying the ultimate sacrifice for answering that call.

Mark McCown, master of ceremonies, said the service was an opportunity to join in fellowship, pay homage and express gratitude to the men and women who paid the price for our freedom.

“While we honor our dead today our thoughts and prayers should extend to those men and women who are defending liberty in this great country around the world,” McCown said. “They, like many of those present today, as well as those buried in this hallowed ground, answered the call. The call of our nation. The call of freedom. And willingly placed themselves in harm’s way to preserve our freedoms.”

Master Chief Joseph A. Benning, retired from the U.S. Coast Guard, was the keynote speaker for the service. He spoke about several guardsmen who paid the ultimate sacrifice to keep the United States a free country.

One of those was Damage Controlman Third Class David B. Bruckenthal. The 25-year-old died in the Northern Persian Gulf in 2004 during an assignment in which he and two members of the Navy boarded a foreign vessel to look for violations of the sanctions of international law. He became the first casualty killed in action in a wartime scenario since Vietnam, Benning said.

Bruckenthal left behind a wife who was three months pregnant.

“They have a 9-year-old daughter who doesn’t know and never really will know her father who made the sacrifice,” Benning said. “That is the thought that many of us service members have when we’re deploying, will we ever see our children again.”

Benning also spoke of Coast Guardsman Douglas Munro, who was the only guardsman to receive the Congressional Medal on Honor.

“He volunteered for a mission to evacuate wounded Marines off the beach at Guadalcanal (in 1942),” Benning said. “They weren’t looking for anybody. They weren’t ordering anybody to go. They were just looking for volunteers because it was such a dangerous mission.”

Munro was fatally shot during the mission, but before he died, Benning said, the guardsman only wanted to know if the Marines were safe.

“He was brought back on the boat and when they came back on the landing craft, the only thing that came out of his mouth was to ask if the marines had gotten off first,” Benning said. “That is truly that selfless dedication we have with our Coast Guard service members about the willingness to go and sacrifice our own lives to save others.”

After Benning’s address, the VFW Post 8850 continued the tradition of placing memorial wreaths in the Soldiers Plot. The post also provided the gunnery salute and played Taps.

Lori Donohue provided the music for the service and Brother Chad Pemberton gave the invocation and benediction.

“It is only because of men and women like those who are standing here today that we are able to stand here and say we are a free country,” Pemberton said. “Aren’t you glad of that? Don’t we have something to praise God for?”

To which the crowd responded, “Amen.”

Graduates from Fairland High School are excited as they participate in the processional at the start of commencement exercises Friday.... read more