County getting salt ready for winter 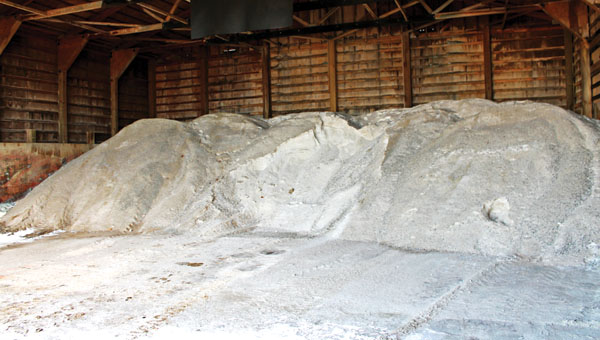 Doug Cade, Lawrence County Engineer, said the county will have about 1,200 tons of salt on hand to combat icy roads this winter.

One third of all salt in America is used for ice on the roads.

As winter approaches, Lawrence County is getting prepared.

“Generally in April, the Ohio Department of Transportation (ODOT) will ask every county, village or township how much salt they want,” Lawrence County Engineer Doug Cade said. “It’s hard to know that far in advance how much will be needed, but I make a guess at how much salt we will need. What is ordered is all that is going to be given.”

Cade does all of the projecting and ordering of salt in Lawrence County himself.

“We only use what we need,” Cade said. “We don’t want to be wasteful.”

In Lawrence County, salt is mixed with grit, a fine gravel, to conserve a little bit on the salt being used. Grit is ordered from BWC Trucking at $15.09 a ton.

“We don’t want to ever run out of salt,” Cade said.

Extra salt will always carry over to the next year if it is not used.

SOUTH POINT — Angela McKeone, of South Point, is one of a kind. She recently won the title of Mrs.... read more