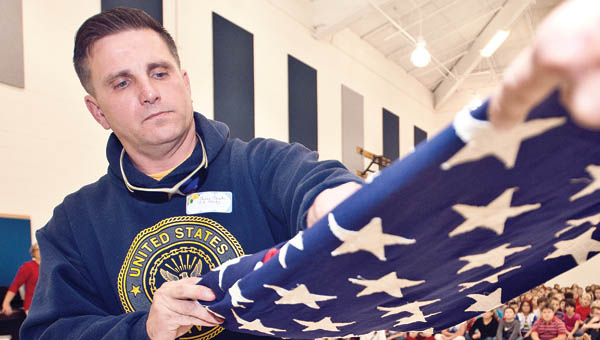 THE TRIBUNE/JESSICA ST JAMES
U.S. Navy veteran Bill Crank demonstrates the folding of the flag to students on Monday at Burlington Elementary School during a Veterans Day assembly.

Students, faculty and guests filled the gymnasium while veterans watched the ceremony from the stage.

The students played a big role in making this an event to honor the veterans. After assistant principal Michael Clay made his greetings, kindergarten students Kylah Blue and Zoe Osbourne led the Pledge of Allegiance followed by fourth-grader Braylon Balandra singing the national anthem.

“I liked singing the national anthem,” Balandra said. “It’s a good way to be nice to the veterans after what they have gone through.”

The ceremony continued with opening remarks, learning a little bit about the history of Veterans Day, what the day means to veterans and the recognition of all of the veterans who were there, as they all stated their name and their military affiliation. The students then sang songs to show their appreciation of the veterans.

Next, veterans demonstrated the folding of the flag, while students Zac Gibson, Erin Fugett, Nicole Collier and Josh Helton read off what each fold stands for.

The fifth graders then sang “You are our Heroes,” followed by a Veterans Day prayer read by students Anna Jackson, Brooke Ruggles, Preston Barnett, Rece Craft and Liam McLean. Assistant principal, Clay, then ended the ceremony with closing remarks.

“This is the first year that we have done something for Veterans Day on this scale,” Clay said. “Before this year, we just had a little gathering by the flagpole. We are hoping to keep this going.”

The veterans really appreciated the ceremony and everything that the students did for them.

“It’s good to be appreciated for what we did for our country,” Robert Smith, U.S. Army veteran, said. “It’s great that we have reached this point of patriotism to honor the veterans that served.”

“I think that anytime you hear thank you for something that is often times taken for granted, it means a lot,” U.S. Air Force veteran, Rev. Stanley McDonald, said. “I see all of these kids out there, and hearing them say thank you just shows why we do what we do.”

After the ceremony all of the students got in line to shake each of the veteran’s hands.

“The students are told about what Veterans Day is and they learn about it in class,” Clay said. “But until they experience it and meet the veterans, it doesn’t fully sink in.”

That is exactly what they got to do.

COAL GROVE — It’s only fitting a school named for two World War I veterans to have a ceremony involving... read more