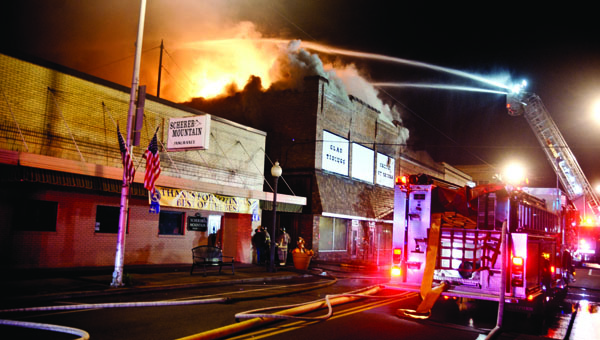 “There was no loss of life or injuries,” Runyon said. “We are working with the owners of the building to get the situation with the walls being unstable taken care of.”

The fire and the subsequent instability of the building has prompted Mayor Rich Blankenship to keep part of Third Street closed as a safety precaution.

“Third Street from Vernon Street to Park Avenue will remain closed because of the building’s instability after the fire,” Blankenship said. “It’s too hazardous for drivers and pedestrians. It’s leaning and very unstable.”

Flames were shooting from the top and the sides of the building as smoke was billowing into the sky. The Ironton, Coal Grove, Upper Township and Ashland fire departments were all on the scene; there were at least seven fire trucks and two ambulances present. The Ohio State Highway Patrol was directing traffic as the roads surrounding the fire were all blocked off.

Hundreds of people gathered in front of the Ro-Na Theater and Unger’s Shoes, as well as the parking lot of Liberty Federal Savings Bank on Park Avenue behind the building to see the fire.

Third Street and some side streets lost power due to the fire.