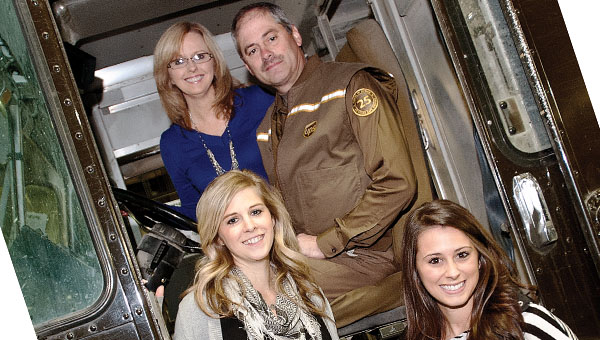 Ashland resident Dave Damron, with his wife, Silesia, and daughters, Allison Pettrey, left, and Lauren Damron, right, has said goodbye to UPS after 33 years of employment.

Co-workers, family and friends all gathered for a breakfast at the UPS center in Ashland Friday morning to celebrate Dave Damron’s retirement.

Damron has worked as a UPS driver in Ironton for almost 33 years.

“It has really been a good career for me,” Damron said. “I’ve been here a long time. I’ve seen a lot of businesses and people come and go over the years, but there are a ton of great memories.”

The job paid well and had good benefits, but the people is what he will miss the most, he said.

“When you are around the same people for so long, it’s amazing how much you get to know about them and their families,” he said. “They are all such great people.”

There was nothing but praise for Damron by his co-workers at UPS.

“We’ll miss his personality more than anything,” Josh Cahall, UPS supervisor, said. “He is always upbeat and always smiling. It won’t be the same around here without him. We will definitely miss him.”

“Dave is one of those guys that UPS honors the most. He is a total team player,” he said.

The one thing that makes Damron stand out more than anything is that not only is he close with his co-workers, but everyone he has delivered to knows him as well.

“I’m amazed at how he knows everyone that he has delivered to in Ironton over the years,” Blake Sparkman, UPS on-car supervisor, said. “That’s a pretty special thing to accomplish.”

Dave’s positive attitude is one thing that will be remembered long after he leaves.

“With this job, there could be a lot of stress, but you would never know it from Dave” Leigh Guilkey, UPS business manager in Ashland, said. “Dave always does a great job with his job and he always takes care of his family. He is the epitome of what UPS wants in a driver. I can’t say a single bad thing about him.”

Damron feels like now is the right time to retire.

“It made a good life for my daughters, Allison (Pettrey) and Lauren, as well as my wife Silesia, but it’s time for me to move on and let some of these young guys come in and get started,” he said. “I’m looking forward to spending time taking care of my family, playing golf and relaxing. I also have a grandbaby on the way, so I’m excited for that as well.”