An honor to know them 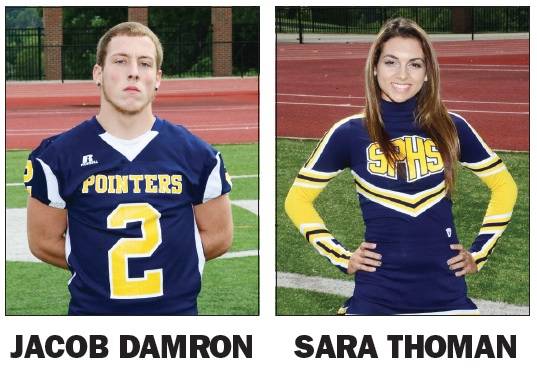 SOUTH POINT— Seventeen year-olds Jacob Damron and Sara Thoman, both of South Point, who died on Sunday as a result of a two-vehicle car accident, will be remembered the most for their positive attitudes, Jacob’s time on the football field and Sara’s cheerleading for the South Point High School Pointers.

“Jacob was tough as nails if you ever watched him play football,” Mark Christian, South Point superintendent, said.

South Point head football coach Rick Marcello had nothing but praise for his player.

“First and foremost, it has been an honor and a privilege to coach Jacob for three years,” he said. “Football was everything in his life. It was his passion. Not only was he a gifted and talented player himself, but he understood the meaning of teamwork as well.”

While Jacob was a bit undersized, he more than made up for it with his play, as those who have watched South Point High School’s No. 2 make plays all over the field.

“While he was a little smaller, he was very competitive and his performance was what you would expect from someone twice his size,” Marcello said. “While his primary position and favorite to play was outside linebacker, he was a multi-skilled athlete who knew and could play just about every position on the defense. He has even lined up at wide receiver and running back for us on offense.”

Working as hard as anybody and never complaining about it made Jacob stand out on the football team.

“He was willing to do whatever it took to participate and contribute to winning,” Marcello said. “I’m very proud to have been his football coach.”

Damron was a typical boy who loved to hang out with his friends, teammates and classmates.

“I had Jacob along with a couple other football players in my geometry class this year,” Misty Wood, South Point math teacher, said. “He was a little ornery at times but was always respectful to me. He brought a lot of life to the class and loved to just have fun.”

Monday morning, Wood placed a gold bow along with a note on Jacob’s desk in her class for friends and classmates to remember him.

Sara Thoman was a cheerleader for the South Point High School Pointers.

“She was very outgoing,” Sara Chapman, South Point cheerleading coach, said. “Probably one of the toughest kids that I have ever known. She never hesitated to do anything that she was told and had a great personality.”

Chapman has coached Thoman for the past few years.

“As a coach, sometimes we spend more time with the kids than their parents do,” Chapman said. “We expect a lot out of them and Sara never disappointed.”

The goal for this year’s fourth annual Lawrence County Bicycle Giveaway is to give bikes to 350 young people in... read more