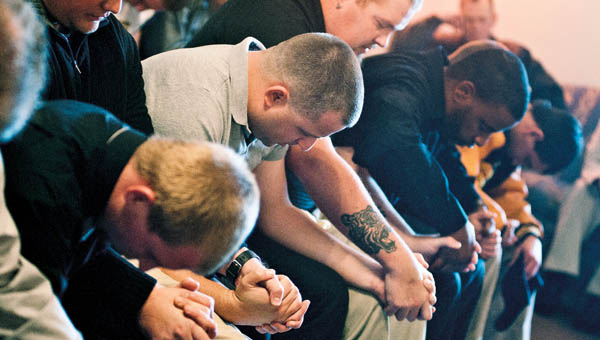 Coaches and team members bow their heads in prayer.

PROCTORVILLE — Jacob Damron’s love of football was obvious as his South Point helmet, blue No. 2 jersey with “Pointers” across the front and a picture of him playing surrounded his casket along with an abundance of flowers.

Family and friends mourned the loss of Jacob during his funeral service at Hall Funeral Home in Proctorville on Thursday.

It was standing-room only as upwards of 200 people attended.

The first few rows of seats were reserved for the football team and coaches. Some players wore jerseys to the service.

“Jacob was not just a member of his own family,” Marcello said, “but he is also a member of the South Point High School family.”

Marcello talked about stories that he remembers Jacob by during his time with the football team.

He recalled one day on the practice field he was frustrated about his team’s effort and the way they were performing in practice.

“Out of anger, I told them that if I didn’t love them, I would just quit,” he said. “Later on, my wife told me about the meanings of mercy and grace, that I then told the team about. I didn’t know if any of them were listening or not, though.”

Marcello had Jacob in his office for a brief meeting where he was going to give him a punishment for something Jacob did.

“I asked him, what do you think your punishment should be?” Marcello said. “He looked back at me and said, ‘I don’t think there should be any, coach.’”

Marcello said he looked at Jacob in disbelief.

“Jacob said to me, ‘Remember when you talked to us about mercy and grace?’” Marcello said. “Now I know at least one person was listening that day.”

Marcello remembered his shoulders sinking and said that Jacob knew he had won that one.

Marcello went on to recall that Jacob left his office, opened the door back up and said “I love you, coach.”

Marcello mentioned about how Jacob never had any nerves about playing football games.

“He always wanted to start the games earlier. He was always busting at the seams and anxious to play the games,” Marcello said. “Jacob loved the game of football more than anyone I have ever coached in 17 years.”

The last thing Marcello talked about was the impact Jacob has made on the South Point football program.

“Jacob was fun-loving, excited and always owned up to his mistakes. He loved his teammates and always gave 100 percent,” Marcello said. “As a coach, I always try to make a positive impact on my players, but I have received more from Jacob than I ever gave to him. I can assure you that. I will forever be grateful to be a coach at South Point and to be Jacob’s football coach.”

One defendant involved in the alleged break-in of an elderly woman’s home will have his case heard by a grand... read more