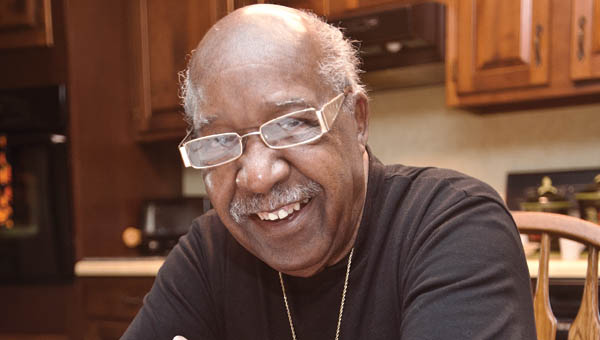 THE TRIBUNE/JESSICA ST JAMES
Longtime Burlington resident and reverend to the First Baptist Church of Burlington Dr. Douglas Carter will be retiring to an on-call basis at the beginning of next year.

SOUTH POINT— Dr. Douglas Carter has seen and been through a lot in his life.

He is retiring after 43 years as the pastor at First Baptist Church of Burlington.

Carter was born in 1928 and is a native of Ironton, where he graduated from Ironton High School. He played football for the Fighting Tigers as well as playing with the semi professional Ironton Bengals from 1948 to 1950.

“During that time, many African-Americans didn’t enjoy school because there were no work opportunities or opportunities to go to college for them after high school,” Carter said. “Once I got my head on straight, I really did enjoy school though.”

Race was a much bigger issue during the era in which Carter grew up.

“Being born and raised in Ironton, there was never a segregated school system there,” he said. “All of the surrounding area schools were segregated at the time and it’s hard to believe that Ironton didn’t segregate. That is rare in this country.”

He volunteered for the Korean War in 1951 and he served in the Air Force until 1955.

“When I came back from Korea, I was stationed in Florida,” Carter said. “I got on a Greyhound bus and sat beside a white woman. I put my things up on the top of the bus and the next thing I knew, I got punched by a white guy.”

Carter had his uniform on with all of his ribbons and everything, he said.

“I had been fighting for this country and still had to take that kind of treatment,” he said. “I never could see the issues that came with race. It is just skin and it’s only a color, but it has caused so much death and hardship in this country. I’m just glad that it’s a lot better today.”

Carter acknowledged his call into the ministry in 1970 and was ordained in 1971, where he began to pastor the First Baptist Church in Burlington.

“At first, I didn’t want to come here or stay here,” Carter said. “But then I realized this is what I was called to do. I have loved being around churches since I was a young boy.”

Before this, Carter worked at Armco Steel in Ashland, where he would become the company’s first African-American supervisor.

“It was shift work at Armco,” Carter said. “I stepped down from supervisor to be the janitor because ministry was what I was called to do. I couldn’t do that with the hours I had being supervisor.”

He eventually left Armco because of a back injury.

Carter graduated from the Tri-State Bible College in South Point in 1997.

“Tri-State Bible College is one of the most biblical schools around,” Carter said. “I hold that college up very highly. One must be very devoted to ministry to go there.”

He received his honorary Doctorate of Divinity Degree in Dayton in 2001 from Faith Baptist College of Anderson, South Carolina.

Carter has seen a lot of changes in the church throughout his time being involved.

“All church functions are declining for some reason now,” he said. “People just are not religious minded today. Before, dedication was No. 1. It just isn’t there in local churches anymore.”

Carter knew that it was the right time for him to retire.

“I’ve enjoyed my ministry, but there comes a time when you just know it’s over and it’s time to retire,” he said. “I’ve finished my course.”

Carter is still going to preach every opportunity he gets, he said.

“I am not quitting preaching, I am retiring from pastoring,” he said. “I want to help the young guys that are becoming pastors if they want to be helped. Right now, I am mentoring five preachers who are under me.”

Carter is married to Barbara M. Carter and together they have 11 children, many grandchildren and great-grandchildren.

The team that organized the red carpet premiere event of the Mickey Fisher-written and produced show “Extant” at the Ro-Na... read more