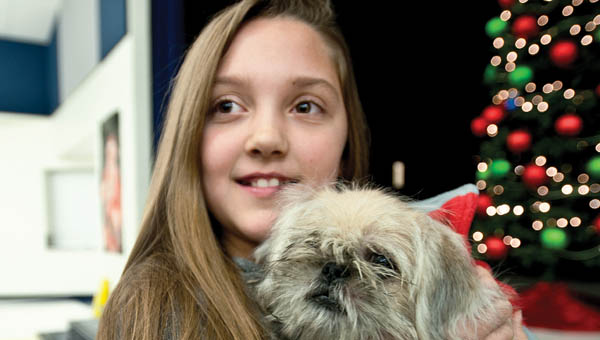 SOUTH POINT — Chewy may be only 13 weeks old, but he knew what to wear his first time at school — the scarlet and gray of The Ohio State University.

His appearance at South Point Elementary was because he was about to get a special honor, thanks to one of his best buddies.

Because of an essay by Madison Spangler, one of Chewy’s owners, the Griffon-Pekinese, is this year’s Top Dog for Lawrence County.

“(My dog) is very sweet,” Madison wrote. “Not the kind of sweet like sugar. That would be silly, if I thought my dog tasted like sugar. He has a talent. It’s not that cool, but he can speak, not like me. He just tries to and it’s funny.”

At a special assembly on Tuesday at the elementary school where Madison, 10, is in fourth grade, county auditor Jason Stephens presented the girl with a trophy and dog tag No. 1.

This was the second year for the auditor’s office to have the contest open to fourth- and fifth-graders, where they write essays detailing why their dog should be No. 1 in the county. The goal of the contest is to get dog owners to remember to buy tags for next year.

“We think we had the most entertaining essays,” Stephens said before announcing the winner.

Joining Madison at South Point, besides Chewy, were her parents, Scott and Charla Spangler, her grandfather, Pete Fizer, and her younger sister, Skylar.

Keeping the secret from their daughter was the most difficult thing for her parents, Charla said.

But wanting to give Madison her own reward, they took her out to buy her a new outfit on the pretense of rewarding her for doing her chores.

“She helps around the house,” Charla said. “I work and we have five kids. Madison helps out tremendously. She is responsible and on the honor roll and wants to go to Harvard.”

A surprised Madison hugged her dog and her trophy and posed for photographs with her family and Stephens.

“I just wanted everybody to know how I felt about my dog,” she said.

Suspect remains hospitalized An early morning altercation on Saturday that caused the death of Anthony Ridley, 60, of Columbus, has... read more