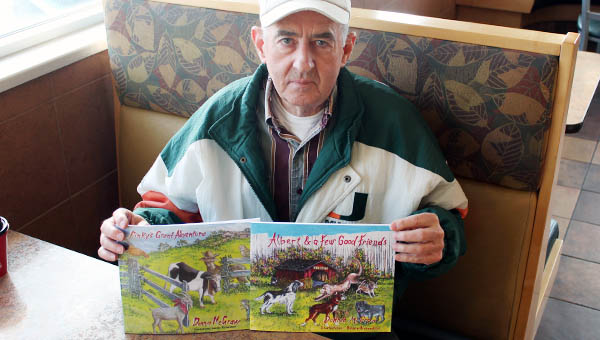 Proctorville resident Donnie McGraw shows off his two children’s books that were just published this year.

PROCTORVILLE — This year Proctorville resident Donnie McGraw had two children’s books published through Mid-Atlantic Highlands, which is an imprint of Publisher’s Place, a non-profit publishing company.

McGraw was born in Logan, West Virginia, was in the Navy from 1960 to 1964 and graduated with a journalism degree from Marshall University in 1971.

“I’ve always been interested in writing,” McGraw said. “I have been writing for about 30 or 40 years. Mostly over the years, I have concentrated on plays.”

“Plays are hard to do anything with unless you find a group of people that want to be a part of it. It takes a lot of time and effort to put on a play,” McGraw said. “From time to time, I would write parts of books as well. I finally decided to write something that wouldn’t take a lot of time.”

Grace is an editor that helps works get published. He has also been a writer and editor for the Associated Press.

“I met Dr. Grace two years ago,” McGraw said. “I decided to take his life writing classes because it would motivate me to get back to my writing and give me an outlet for my writing. I developed the idea for my first children’s book during those classes.”

“Writing short stories and novels takes a lot more time and research. Children’s books aren’t easy to write, but I like writing children’s stories because you are creating them from whole cloth and starting from scratch,” McGraw said. “It is just about your own experiences. Both of these books are parables on life.”

McGraw was raised on a farm and always had or was around animals. “Pinky’s Great Adventure” features a cast of farm animals and “Albert and a Few Good Friends” features a pack of neighborhood dogs. Illustrations were done by Huntington artist Debbie Richardson.

Children’s books like these generally take about a year to write, he said.

“I come up with a general idea and write it down,” McGraw said. “Then, I come up with characters and fill things in as I go. You have to keep coming back to work on it when new ideas come to mind.”

McGraw will be signing copies of his books at the South Point branch at 4 p.m. Tuesday, Dec. 16 and at at 4 p.m. Thursday. Proctorville branch. Copies of the books will be sold there. They can also be purchased for $10 each at the Red Caboose at Heritage Station and Empire Books at Pullman Square, Huntington.