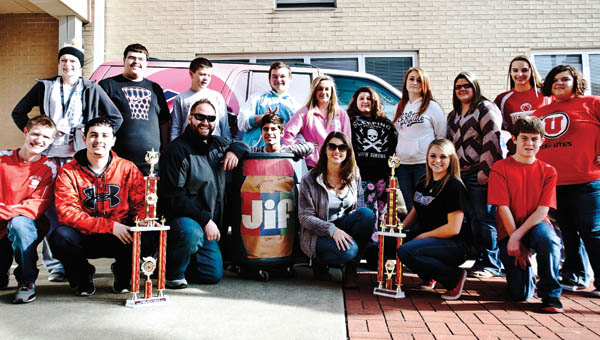 THE TRIBUNE/JESSICA ST JAMES
WKEE morning show co-hosts Dave Roberts and Jen Seay with students from the Rock Hill Honor Society as they congratulate them on collecting the most jars of peanut butter as part of the peanut butter drive for 2014. Nearly 500 jars were collected this year.

PEDRO — Peanut butter is consumed in 94 percent of U.S. households and students at area schools are making sure even those households who can’t afford it will still have a jar.

For the past three years students at Rock Hill High School have collected and donated 1,435 jars of peanut butter for the competition, which goes to the Facing Hunger Food Bank in Huntington.

“It’s tough to win anything three years in a row,” Kim Zornes, English teacher and adviser of the Rock Hill National Honor Society, which organized the drive, said. “We collected fewer jars this year than last year and still won. The students are really excited about it and I was just as surprised as they were.”

This year’s total from Rock Hill was 478, 2013’s total was 655 and in 2012 the total was 302. The competition as it is today is because of Austin Kidd. The former Rock Hill NHS president went on the air in 2012 at WKEE and challenged other schools to match Rock Hill’s donation.

Cutoff for donations was this past Wednesday. The formula used — total number of students versus total number of jars collected — was to even out the competition because of enrollment discrepancies among participating schools. Rock Hill’s total was 132 percent, 478 jars to 361 students. The next highest was Boyd County Middle School where 62 percent of students collected peanut butter.

“That’s impressive,” Dave Roberts, co-host of KEE 100 FM’s Dave and Jenn in the Morning and Rock Hill graduate, said. “Big thanks to every single person, business, organization, school, just everyone who bought or collected peanut butter for this great, great cause. There are so many people and families right here in our area who truly need some help so you did a great, great thing.”

The prize for winning the competition is a two-hour KEE 100 FM in-school dance hosted by Roberts and co-host Jenn Seay this coming spring.

“We thank you all so much because this is helping so many families right here in the Tri-State,” Seay said. “It could be helping people you know.”

WKEE also received 120 jars from the Kentucky State Police and several businesses dropped off peanut butter at the station. Brandi Muriell from MedExpress in Huntington will present a $250 check to Rock Hill for winning the contest.

But, for the Rock Hill National Honor Society, it’s business as usual.

The peanut butter drive began a week after a canned food drive yielded 500 pounds of food for the Brookdale food pantry in South Point. Add that to two blood drives, volunteering at Christmas with Dignity and raising $400 for the families of South Point teenagers who died in car accident and it’s been a busy fall semester for Rock Hill NHS students.

“They are always doing something positive for the community,” Zornes said. “If any of them think of a way to help others, they will do it.”

During this holiday season, while we are all in such a hurry to find the perfect gift, run all our... read more