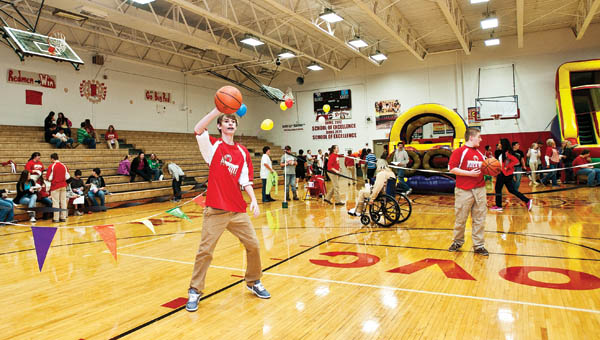 THE TRIBUNE/JESSICA ST JAMES
Mason Darby palms a basketball while he and his friend shoot free-throws on Thursday during the “Carnival of Excellence” at Rock Hill Middle School.

Event is reward for being named ‘High Progress School of Honor’

The Ohio Department of Education notified the administration at Rock Hill Middle on Oct. 29 the school was designated as a “High Progress School of Honor” based on math and reading data obtained from the 2013-14 Ohio School Report Card.

This is the first time Rock Hill Middle School earned the distinction and a “Carnival of Excellence” celebration took place this past Thursday to recognize the accomplishment.

“We are having this celebration because of the test scores and to encourage students to score high in the future,” said Denise Fraley, eighth-grade language arts teacher and National Junior Honor Society Adviser. “They need to know why they are having this.”

Some students played basketball and corn hole while others were entertained by inflatables and carnival games such as ring toss, disc drop and duck pond, among others.

Free popcorn, candy and caramel apples and cotton candy were available for students to eat while librarian Rosemary McCarty predicted the future as the carnival’s fortuneteller.

The banner from ODE displaying the accomplishment hangs in the middle school gymnasium. 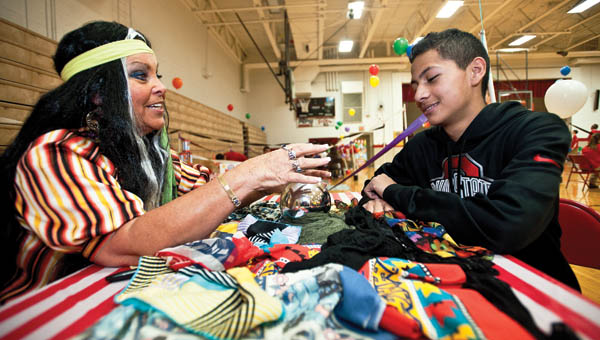 “It’s always exciting to receive a letter recognizing our students’ performance,” Darrell Humphreys, middle school principal said in October when notified about the distinction. “Our teachers and students are working very hard and this recognition validates what we are trying to do here. It’s important to take time and celebrate. It’s important for the students to know we appreciate their effort and recognize their success.”

The Schools of Honor program evaluated schools with a high percentage of students from economically disadvantaged homes and tracks the performance of all students in these areas for the past five years, according to the letter sent to Humphreys from Ohio Superintendent of Public Instruction Dr. Richard Ross.

The $2,000 it took to provide the free carnival came from the school board, administrators at Rock Hill Middle and the National Junior Honor Society.

Since the test scores included those of last year’s eighth-graders, they were invited to the carnival.

“It cost around $4 per student to do this,” Fraley said.

In most cases, whether it is in life, business or sports, the triumph comes through preparation, execution and perseverance. Those... read more