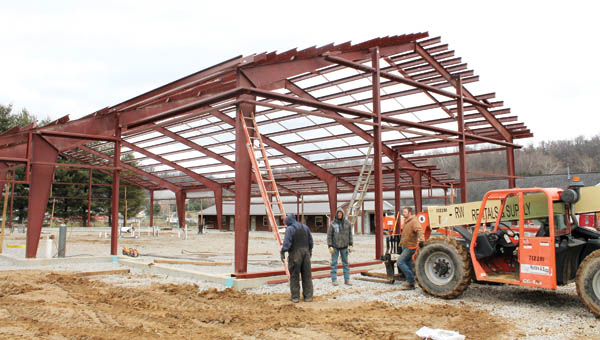 Patton and Queen Construction is building the Broomhall Bible Research Center at the Tri-State Bible College in South Point.

SOUTH POINT — The Tri-State Bible College is in the middle of construction on a new building, thanks to a $2 million donation left by Bessie and Paul Broomhall.

“When the school began in 1970, Bessie and Paul Broomhall took classes here at the Bible College,” Jack Finch, president of Tri-State Bible College, said. “Bessie just turned 100 years old before she passed away and left $2 million for a building to have classes.”

Construction of the Broomhall Bible Research Center began approximately Sept. 1, once architectural designs were approved and all of the required licenses were obtained, Finch said.

The building is being constructed by Patton and Queen Construction out of Ashland and will contain a chapel, eight classrooms, two administrative rooms, a student center and an attached outside student life center.

“Paul and Bessie had this vision for the college to have a place for classes,” Finch said. “They invested their whole life savings into this project. We hope to have it completed by May 1.”

Paul Broomhall was a disabled American veteran who died in 2005 at age 88, Clifford Marquardt, Chancellor and Library Director at the college, said.

“We knew that the school was scheduled to be the recipient of their estate,” Marquardt said. “That was their plan and desire and it was something that they had agreed on before Paul died. We’ve known them for at least 40 years. There is a longstanding relationship between the Broomhalls and the college.”

The Tri-State Bible College is fully accredited by the Association of Biblical Higher Education (ABHE). A two-year associate degree is offered as well as a four-year Bible theology degree. Once approved by the Ohio Board of Regents, a master’s degree of Bible theology will be offered, Finch said.

The Tri-State Bible College has a location in Akron as well as the main campus in South Point. There are about 70 students between the two.

“The Tri-State Bible College focuses on the learner,” Finch said. “Being able to build the Broomhall Bible Research Center is a great blessing for the college and the students that attend.”

“I believe the college is God’s work and God used the Broomhalls to provide the finances for this new building,” he said. “They have lived and died, but their work goes on.”

Man gets 10 years for drug charges

A Proctorville man arrested in June for making meth near an abandoned school in the village admitted his crimes on... read more