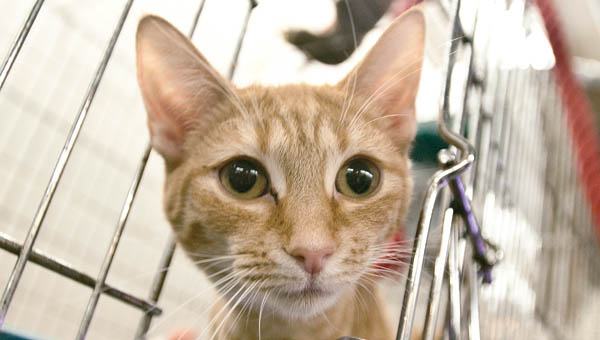 Friends of the Lawrence County Animal Shelter fundraise for cats

The Friends of Lawrence County Animal Shelter received enough donations to put a down payment on a separate building for cats, which is going to be called the “Cat Shack.”

Talks of a separate building for the cats began about a year ago.

“We’ve received a little over $1,600 in donations so far,” Melissa Nicely, volunteer at the shelter, said. “There was one great big giant donation and then six others donated anywhere between $100 and $200.”

The 12-by-24 building was delivered to the shelter on Tuesday.

“It was like Christmas morning all over again for us,” Nicely said.

“There is an option to pay it off early,” Nicely said, “which is what we are working on. The quicker we can pay it off, the cheaper it is.”

The Cat Shack is set for insulation followed by installing plywood and waterproofing, so that it will be easier to clean.

“The first part of next week, we hope to use some of the donations to start the insulation and getting it ready to be used,” Nicely said.

The building will have two ceiling fans, two oil filled heaters and two window air conditioning units for the summer.

The cages are going to be built out of PVC pipe to save money.

“We are going from nine cages to 20 or 30 depending on how we build them,” she said. “We have to figure out how to build the cages so we can have 40 or 50 cats at a time. Right now we just have big cats, but kitten season is coming and we will be getting some litters of kittens in.”

As it is now, the cats are in the back of the shelter from the dogs, and at night, the door between the dogs and the cats is kept open because of heat.

“I think it’s wonderful for the cats,” Nicely said. “I think the cats are going to love it being away from the barking dogs. They are around the dogs barking all the time now and you can tell that they don’t like it. It’s also a safety factor because sometimes a dog may get loose.”

The current cat section of the shelter is still going to be available for isolation in case any of the cats show signs of sickness.

To donate, contact Nicely at 740-533-1736, send a donation via PayPal account at folcrescue@gmail.com or drop off a check at the shelter at 1302 Adams Lane.

Make sure that you specify Cat Shack on the check memo or PayPal, to ensure that the donation goes toward the Cat Shack.

D eveloping a plan is essential for almost anything in life. This is especially the case when dealing with a... read more