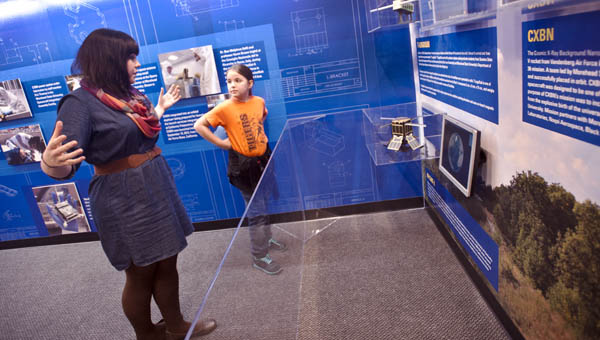 Emily Roush with the Highlands Museum and Discovery Center talks to a young visitor in the newly constructed space and science center.

ASHLAND — What used to be an area used for storage in the Highlands Museum and Discovery Center has turned into the recently opened “Satellites, Aerospace and the Bluegrass State” exhibit designed and built by the Morehead State University Space Science Program.

“This exhibit will help visitors gain a better understanding of where satellites are in earth’s orbit and how that relates to their function,” Eric Thomas, director of MSU’s Star Theatre, staff member of the university’s Space Science Program and designer of the exhibit, said. “It will also let visitors learn about the process of building satellites, gain a better understanding of the role of ground operations in satellite management and more about MSU’s space science programs overall.”

The Highlands Museum and MSU teamed up to be able to make this exhibit possible.

“It was so cool to meet and work with the people that build satellites,” Emily Roush, educational and marketing director at the museum, said.

The exhibit features diagrams, pictures and information, a video game that tests the ability to keep a satellite in orbit and 1:1 scale models of satellites built and flown by MSU.

“A lot of people think of satellites as these giant machines in outer space,” Roush said. “But to see a 1:1 scale model is eye opening. People don’t realize that aerospace parts are built right in our backyard, not just at MSU, but all over the state of Kentucky.”

As of now, the museum hosts a lot of elementary school children as well as adults, but this exhibit will bridge that gap for an audience the museum has been targeting of middle school and high school students.

“The Highlands Museum is very excited to be in partnership with MSU’s Space Science Program in bringing this educational exhibit to the Ashland area,” Carol Allen, executive director of the Highland Museum, said. “As a former educator it has been my desire to expand our educational opportunities in science and technology available to area middle school and high school students.”

The exhibit also features the Highland International Space Station, an interactive simulation of a space station for students with activities such as a camera and microphone to talk from one side of the station to the other and a robot voice changer.

The partnership between MSU and the Highlands Museum and Discovery Center is long term, and through the partnership, the exhibit will continually be updated. There will also be collaborations on workshops, summer camps and guest speaking opportunities in the future.

“We are thrilled to be offering workshops to school tours and summer camps, thus enriching the classroom experience,” Allen said.

MSU is one of five schools in the United States that have a space science program like this. The exhibit will not always be about satellites, but it will always be space-themed.

“The exhibit has the fun elements and it grows with the children,” Roush said. “There’s something here for everyone.”

Allen says she is looking forward to the partnership.

“We are glad to be involved with MSU’s Space Science Program,” Allen said. “We are very excited about it.”

The Highlands Museum and Discovery Center is certified through the Association of Science and Technology Centers. Becoming a member will get one into over 600 museums worldwide for free or at a reduced cost.