PROCTORVILLE — When the McDonald’s Prize Patrol hit the front door of the Proctorville McDonald’s on Thursday, Sara Smithers wasn’t sure what was in store.

By the time they left, she couldn’t believe it. She was on her way to the Super Bowl. 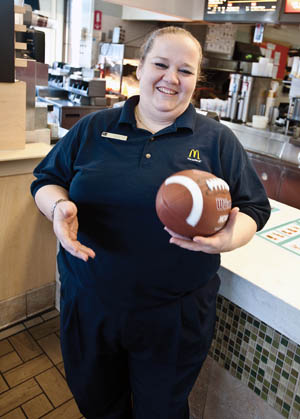 “I was in pure shock,” Smithers said. “This is a once in a lifetime thing and I’m very excited.”

When the Prize Patrol came in, they laid out envelopes for 11 employees — eight managers and three crew members.

Smithers won the grand prize of two Super Bowl tickets to Super Bowl XLIX in Phoenix, Arizona, worth approximately $1,000 apiece; the other 10 received Xbox One systems and a video game. All expenses will be paid for Smithers’ trip.

“I’ve never been on an airplane before, so I’m scared about that,” Smithers said. “But I can’t wait to go.”

Joining her at one of the premier sporting events will be Smithers’ husband.

“My husband was like a kid in a candy store,” she said. “He threw his hat and ran around the house.”

Smithers and her husband are Steelers fans, but since Pittsburgh is out of it, they are hoping the Cowboys make it to the big game, she said.

Dusty Dement, another manager at the restaurant, was just as happy with his win, even if it wasn’t the big prize.

“It was a really big deal,” he said. “Winning something as big as an Xbox One, even as a consolation prize, makes you feel like you didn’t lose anything. It’s awesome to be rated No. 1 in customer service. It was based on customer polls by call-ins and mystery shoppers.”

Smithers has worked at the Proctorville store for the past three years starting out on the crew, then getting a promotion about a year ago.

“We all work as a team here,” she said. “The managers and the crew all working together help keep things moving smoothly. I’ve worked in fast food before but this is the best fast food restaurant I’ve ever worked for.”

She also had praise for the McDonald’s Corporation as a whole.

“I think McDonald’s shows a lot of appreciation for their managers and crew,” she said. “They will do anything they can for you.”

Water gushes as crews work to repair a burst water line on the corner of South Fifth and Washington streets... read more