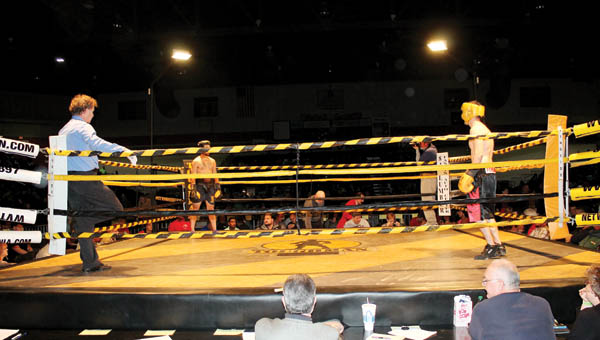 The Tribune/Dustin Melchior
Two competitors get ready to fight Friday at the Toughman Contest.

HUNTINGTON, W.Va. — The fans in the nearly packed Big Sandy Superstore Arena on Friday and Saturday were in for some boxing action at the 36th Toughman Contest.

Friday night featured 36 fights where each person fought once. The winners moved on to Saturday where they fought in multiple matches.

Since the Toughman Contest is for amateur fighters only, there is a lot of excitement and cheering from the crowd, something that normally wouldn’t happen at a professional boxing match.

“At the Toughman, you get to see a lot of young fighters,” Paul Thorton, Toughman judge, said. “There is a lot of variety and excitement and cheering from the fans. Pro fights are a lot quieter.”

Thorton has been around boxing since 1965. He is a judge as well as a referee and a chief deputy of the boxing commission. He has also been involved with the Toughman off and on for all 36 years.

“I like the individuality of boxing,” Thorton said. “It’s just the fighters in the ring.”

“I’ve been boxing since I was 13,” Whitley said. “I was always picked on in school, so I had to show the guys I could keep up.”

This was Whitley’s first year in the Toughman Contest.

“I like boxing because I can just be myself. When there’s a bad day I can unleash the fury,” she said. “I’m doing it for my babies.”

The tournament continued Saturday, where the winners from Friday moved on to compete for the division titles.

“The physical condition boxers have to put themselves in can be very difficult,” Kenny Litteral, Toughman worker, said. “It’s all in their preparation and mind.”

Litteral is a volunteer at 304 Boxing Academy in Huntington. This is his second year working for the Toughman. He has fought in it once as well.

“I love it when the undeedog succeeds,” he said. “I love the underdog.”

The Ohio University Southern Campus Council on Diversity and Inclusion is having a special program at 6 p.m. on Tuesday,... read more