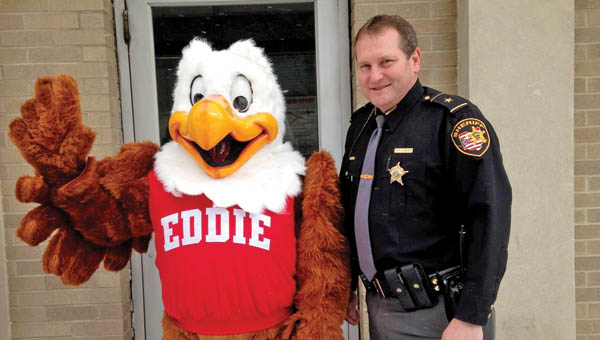 Thanks to a grant from the National Rifle Association, the Lawrence County Sheriff’s Office has a new way to teach gun accident prevention to children.

Eddie Eagle recently joined the ranks of the sheriff’s office’s other mascots, McGruff the Crime Dog and Splish and Splash, the water safety duo.

According to sheriff Jeff Lawless, the agency entered a contest last year and was selected as one of 11 agencies nationwide to receive the $2,800-mascot costume. The LCSO was also the only agency out of 10 that entered the contest in Ohio to receive the costume.

“We had been receiving Eddie materials and we’ve been inquiring about a costume for a while,” Lawless said.

Lawless said the contest required essays and plans on how the costume would be used, as well as other ways the sheriff’s office reaches out to the community.

There are no scheduled events planned just yet, but Lawless said Eddie Eagle would be used in the schools and at community events to teach children gun safety, such as Eddie’s popular motto, “Stop. Don’t touch. Leave the area. Tell an adult,” and that only with a parent or with parental permission and adult supervision should a child be around firearms.

“We’re in an area where guns are prevalent, which is not a bad thing in my opinion, but we need to use safety and caution,” Lawless said.

The Eddie Eagle program was created in 1988 by past NRA president, Marion P. Hammer, with a task force that included specialists such as educators, school administrators, curriculum specialists, urban housing safety officials, clinical psychologists, law enforcement officials and National Rifle Association firearm safety experts. Since then, it has reached more than 26 million children.