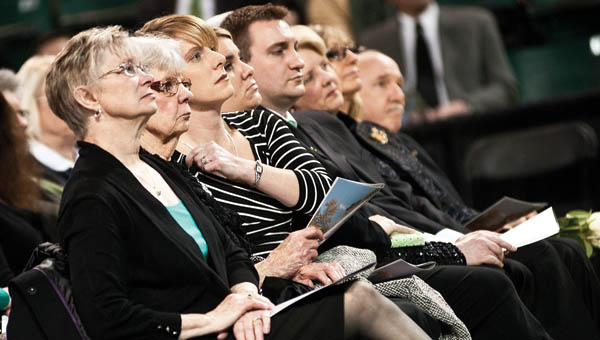 (ABOVE) The family of Dr. Stephen J. Kopp listens as one speakers tell amusing stories and speak fondly of the president during a memorial service on Tuesday. (BELOW) Justice Menis E. Ketchum II talks about his colleague and friend.

“We come together today to remember a person that we know in different ways,” Dr. Bill Bissett, former chief of staff and senior vice president for communications said to the crowd in his opening remarks. “It has been said that Stephen J. Kopp was known as many titles: president, leader, administrator, researcher, mentor, friend, family member, grandfather, father and husband. Today’s event was designed to share memories of Dr. Stephen J. Kopp in all these different capacities, and while giving many a sense of closure, also remind us of the legacy that Dr. Kopp leaves at Marshall University.”

Kopp worked tirelessly for the betterment of Marshall University, those paying tribute said. When he arrived at Marshall nearly 10 years ago, he wanted to get enrollment up, and recruited students all over the state of West Virginia.

Knowing the only way to do this was to upgrade living facilities and add a recreation center to the university, he achieved his goal by getting contractors to accomplish this while all others doubted him, family friend Justice Menis E. Ketchum II of the Supreme Court of Appeals of West Virginia, said.

“He was a lifelong student and teacher,” she said. “One of my earliest memories of Dad was watching the Chicago Cubs together. We would watch on our little 13-inch black and white TV in the kitchen. I would climb up on the kitchen counter, and he would stand next to me and explain everything that was happening on the screen.”

Kopp was just as involved with his family as he was on his work.

“Steve was a leader of higher education in the state, and that will be impacted greatly on a professional level. He was a very smart guy that understood everything about higher education more than anyone I know,” Gordon Gee, president of West Virginia University, said. “We were also very good friends on a personal level, and now that’s sadly diminished.”

Kopp had a very large impact on how Marshall University is viewed today, Bissett said.

He not only grew the campus with upgrades and new buildings, but also made substantial growth in academics and athletics through extensive research that will be remembered and built upon by the next leader.

“It will be a challenge, but with Gary White (interim president) and Michael Sellards (chairman, Marshall University Board of Governors), everyone who cares about this institution can feel confident that they will find the right person.”

The service was filled with hugs, tears and remembering all of the good that Kopp brought to Marshall University as well as everyone that he had impacted.

SOUTH POINT — A shooting Tuesday evening on Township Road 616 in the area of Leo’s Carryout has left one... read more