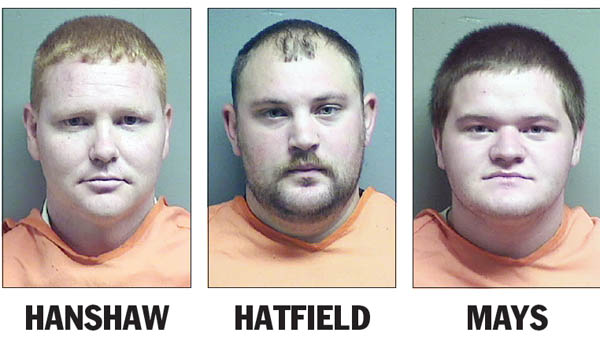 CINCINNATI — Three former Lawrence County Jail corrections officers who were arrested in August for the alleged mistreatment of an inmate were indicted Thursday by a federal grand jury in Cincinnati.

Jeremy S. Hanshaw, 36, of Coal Grove, Ronald S. Hatfield, 25, of Waterloo, and Jason D. Mays, 22, of South Point, were each charged with conspiring to deprive, and depriving, an arrestee of civil rights while acting under the color of law as deputies of the Lawrence County Sheriff’s Office.

The indictment alleges that on or about Aug. 16 to Aug. 17, 2014, while working as deputies at the Lawrence County Jail, Hanshaw and Hatfield slammed, kicked and punched a victim when that victim was handcuffed behind his back and was not resisting or posing a physical threat to any officer, according to a press release from Stewart’s office.

The release goes on to say the officers allegedly slammed the victim to the ground and restrained him in a chokehold while lying on top of the victim. The indictment further alleges that Hanshaw choked the victim and delivered an elbow strike to the victim’s head while the victim was restrained on a medical gurney. Then-deputy Mays allegedly struck the victim in the neck with a closed fist and attempted to block a surveillance camera while his fellow officers had the victim on the ground.

In addition, one or more of the defendants allegedly wrote false entries on logs and reports in which they created a false justification for the assault on the victim.

The defendants were arrested on Jan. 15 by FBI agents, according to the release.

Following their initial arrest, Mays was fired, while Hatfield and Hanshaw were placed on paid administrative leave as required by their union bargaining unit agreement.

Both Hatfield and Hanshaw were hired as corrections officers in June 2013. Mays had only been employed at the jail since June of this year.

“The protection of civil rights is one of the FBI’s highest criminal priorities,” said Barrios. “The FBI is committed to holding accountable those who believe they can abuse the powers they have been granted.”

An indictment merely contains allegations, and the defendant is presumed innocent unless proven guilty in a court of law.