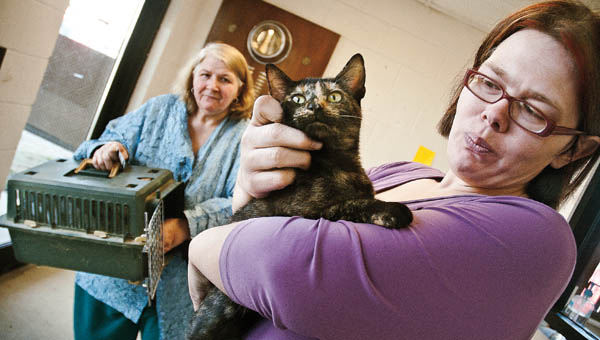 Melissa Nicely says goodbye to one of the shelter’s cats on Saturday before it is adopted by Brenda Ervin.

Brenda Ervin arrived at the Lawrence County Animal Shelter on Saturday with a green pet carrier in hand.

“I’m here to get her,” she told pound keeper Melissa Nicely.

Nicely opened the cat cage in the lobby and handed a full-grown tortoiseshell cat to Ervin. Her face lit up.

“I had one just like this names Patches for six years and she died,” Ervin said. “This one is her twin I swear. I am going to name her Calico.”

Ervin is one of many residents who are taking advantage of the shelter being open from noon-4 p.m. on Saturdays.

“We started opening on Saturday since the first Saturday in December,” Nicely, who is also co-founder of the Friends of Lawrence County Rescue, said. “County dog tags are on sale here at the shelter until Jan. 31 so we will have a lot more people coming in. Next Saturday I expect we will be slammed.”

The new 12-by-24 “cat shack” should be completely in use by the end of February, Nicely said.

“We are ready to run electricity from inside the building to the cat shack,” she said. “Once that’s finished we can put up the walls and start putting in cat cages.”

A few more donations have been received in the ongoing fundraising effort to pay for the cat shack.

To donate, contact Nicely at 740-533-1736, send a donation via PayPal account at folcrescue@gmail.com or drop off a check at the shelter at 1302 Adams Lane.