OUS emergency was false alarm: Campus was on lockdown for more than 1 hour 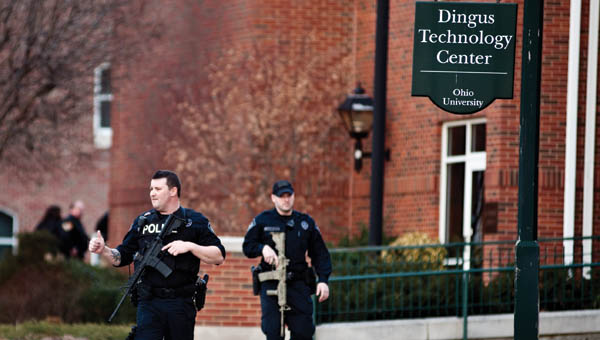 False reports of a gunman roaming the halls at Ohio University Southern on Wednesday caused the campus to initiate a precautionary lockdown.

Word of a trench coat-clad, gun-toting shooter on the loose at OUS in Ironton spread like wildfire on social media and eventually made its way to traditional media outlets.

According to a press release from OUS Marketing and Public Information Officer Shelly Betz, upon review of campus surveillance video, along with the eyewitness description of the suspected intruder and law enforcement confirmation, it was determined that the person in question was on campus for official business as part of a normal courier pickup. Subsequently, law enforcement issued an “all clear” for the entire campus and evening classes resumed their normal schedule.

The situation began to unfold at approximately 4 p.m. on Wednesday after an OUS student reported a possible intruder inside one of the campus buildings. After receiving this information OUS dean Dr. Nicole Pennington, in conjunction with the director of facilities management Adam Riehl, contacted local law enforcement and instituted an emergency lockdown. They arrived on campus within minutes to assess the situation.

The Lawrence County Sheriff’s Office, Ohio State Highway Patrol and Ironton Police surrounded campus fully armed just after 4 p.m. “We are securing a building and that is all you need to know,” a member of law enforcement told a member of the media.

During this time, all students, staff and faculty were locked in secure rooms throughout the campus as part of emergency lockdown protocol. Notification of the lockdown was issued through various campuswide communication channels.

“A couple of students saw a man wearing black cargo pants and had a gun on his side and no markings on his jacket,” Lawrence County Sheriff, Jeff Lawless, said. “He was wandering down a hall and carrying a bag. The students were frightened.”

It was soon determined there was no shooter. The man turned out to be a driver with the Brinks’ security firm who was there to pick up the money in an ATM machine on campus. Law enforcement did a complete search of the buildings including viewing surveillance video. When they saw the driver in the hall, they recognized he was with the security firm and sent a text message to Brink’s to confirm that he was one of their drivers, Lawless said. He was with the firm.

“He had done his job prior to law enforcement arriving,” Lawless said. “He had no idea the panic that ensued. He had left the building.”

During the lockdown students arriving for evening classes were not allowed on campus.

“We take any reports of this nature very seriously,” Pennington said. “We instituted the proper protocols for an active shooter emergency situation, although there was never a presence of danger. We are very pleased to have the support of local law enforcement and make every effort to keep our students, staff and faculty safe at all times.”

GREENUP COUNTY, Ky. — A Kitts Hill man involved in a polyamorous relationship charged with the 2013 murder of his... read more