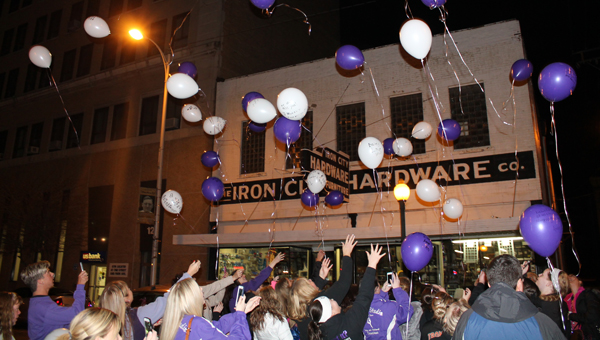 Purple and white balloons filled the air Monday evening outside of Cyndi’s Dance Studio as the dancers and their families remembered Rose Marie Rist, secretary and one of the dancers’ biggest fans.

“She’s been with us here the whole 25 years,” Cyndi Rist Roth, owner of the studio and daughter, said. “She couldn’t work because she had asthma so bad, but she enjoyed being up here with us and watching the kids. She was their biggest fan.”

Rist had a heart attack the week of Thanksgiving and died Jan. 19 at 77. She had asthma since she was 5.

“She helped take care of the books for Cyndi, sell candy and did anything we asked,” Teresa Rist Belcher, daughter and dance instructor, said. “It was just something she liked to do.”

Although Rist was only at the studio two days a week for three or four hours, the impact she left was immense.

“I’ve been here since I was 2,” Ashley Jones, 19, said. “She has been in my life since I was small. She was practically my grandmother. If I needed anything, I could always call her.”

Jones started at the studio when she was 2 years old and continues baton. She is also an instructor.

Rist being like a grandmother to the dancers was a common theme.

“It feels like one of my grandparents are gone,” Leah Powers, said.

Powers danced at the studio growing up and now her daughters dance there as well.

Granddaughter Amariah Fultz remembers her grandmother always being there for her.

“She made all my costumes. We spent many evenings fitting my costumes,” she said. “She was at all of my contests growing up and was always in the front row, right in the middle.”

The balloon launch was a way for the children to say their goodbyes.

“It was the parents’ idea to have a balloon launch,” Roth said. “A lot of the kids couldn’t get to the funeral.”

The children also wrote messages on each balloon.

“She’ll never be able to be replaced,” Belcher said. “But it’s not the end, just see you later.”