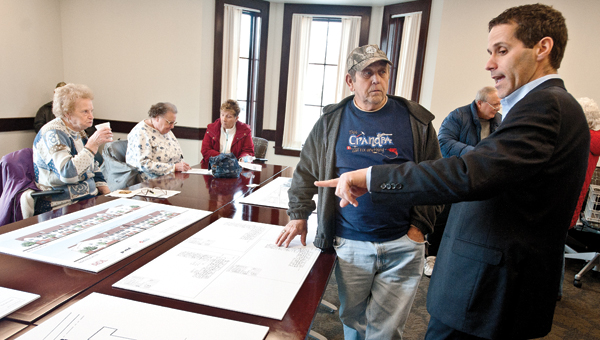 PROCTORVILLE — Proctor’s Landing, a 56-unit independent senior living community set to be in Rome Township, is in the early planning stages through a partnership between the Ironton-Lawrence County Community Action Organization (CAO) and PIRHL Developers, LLC out of Cleveland.

The CAO and PIRHL met with potential residents at an open house Tuesday afternoon at Ohio University Southern Proctorville campus.

“PIRHL has been working with the CAO for a couple of years to develop quality housing for seniors on a fixed income,” David Burg, co-founder and principal of PIRHL, said. “There’s such a lack of housing for these seniors. It is designed for independent seniors ages 55 and older.”

Currently the project is in the development process and PIRHL is trying to secure financing from the Ohio Housing Finance Agency (OHFA), he said.

Seniors with incomes at or below 60 percent of the median income of Lawrence County will be eligible to live at Proctor’s Landing. The community will have 19 one-bedroom units and 57 two-bedroom units and rent will range from $217 to $614.

“What this allows us to do is provide a quality living environment for seniors who have limited ability to pay rent,” Burg said. “In June, we’ll have a better idea of funding, At that point, we would start the pre-construction process.”

Burg said the goal for the project is to break ground for construction in 2016 and have it complete and ready for occupancy by early 2017.

Although PIRHL operates in several states, this is the first project that they are doing in Lawrence County and it is going to cost an anticipated $9.7 million.

“I would move tomorrow if I could. I’ve been so anxious about this for the last two or three years. Right now, I have my own house in the flood plain,” Garnet Keeney, 77, of Chesapeake, said. “It’s hard to mow grass and get someone to take care of the house. I want to get rid of all that and get closer to the town with my age. My son lives in North Carolina. He doesn’t want me to just go to an apartment, he wants me to go to a senior community where he doesn’t have to worry.”

“Working with PIRHL has been very good,” Ralph Kline, assistant executive director for economic planning with the CAO, said. “PIRHL is very community-minded and open to community input. They are working with us to develop the housing the way we want it.”

Proctor’s Landing will be located on County Road 107/ Market Street, right across from Fairland Middle School.

CHESAPEAKE — A second fire has apparently wiped out the main structure at Sky Lake this morning. According to 911... read more