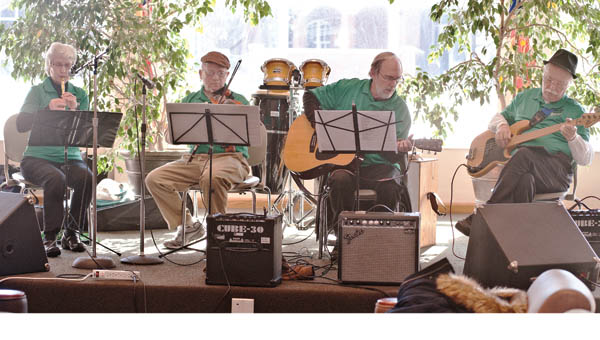 Members of Kelley’s Bridge perform in the Mains Rotunda at Ohio University Southern during the weekly Brown Bag Concert Series event on Wednesday.

Everyone in attendance at this week’s edition of the Brown Bag Concert Series on Wednesday at Ohio University Southern-Ironton listened to Irish music played by Kelley’s Bridge, a local band started in 2007.

“We have weekly concerts here that are free and open to the public,” Nina Queen, concert coordinator for OUS student services, said. “This is probably the 17th year of Brown Bag. A lot of community members, students and faculty come to it.”

Kelley’s Bridge is made up of Bruce Brown, band leader who plays an electric six string violin, Christine Hunt on the penny whistle, Rod Erwin on guitar, Herb “Hub” Rose on bass and Teri Erwin on percussion, although she did not play at the concert.

“We started playing together at the Vesuvius Iron Furnace Festival,” Brown said. “A newspaper wanted a name for us, so we named the band Kelley’s Bridge. We play a lot of Irish Celtic tunes and Kelley’s Bridge sounded like a good Irish name.”

The name is from a bridge on State Route 93 halfway between Ironton and Lake Vesuvius Furnace.

Brown, Hunt and Rose were the original members of the band. Rod and Terri Erwin joined later.

OUS has the Brown Bag concerts on Wednesdays at noon in the Mains Rotunda of the Riffe Center.

With a Feb. 1 deadline looming the Ironton City Council on Wednesday had a special meeting for the sole purpose... read more