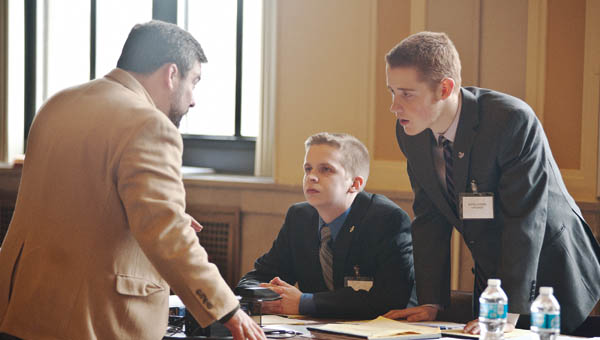 Attorney for the plaintiff (St. Joe’s Ariel Porter) rose from her seat in the juvenile courtroom of the Scioto County Courthouse.

Porter’s objection came during the defense attorney’s (Wheelersburg’s Stephen Dye) line of questioning for a witness during a district Mock Trial Competition in Portsmouth.

Plaintiff Jones (Zorada Porter) is a female inmate at the Buckeye Juvenile Correctional Institute and is suing for a violation of her Eighth Amendment rights, which forbids cruel and unusual punishment. Jones was a highly recruited high school basketball player who had aspirations of playing in college and professionally.

During a food fight in the jail’s cafeteria in which Jones may or may not have been the instigator, her wrist was injured because of what she claims was excessive force by one of the guards.

Furthermore, the BJCI’s in-house nurse Robin Rodgers (Wheelersburg’s Abby Runyon) took an X-ray of Jones’ wrist and determined it was sprained. Three weeks after the cafeteria food fight Jones’ complaints about her wrist continued and she was referred to Dr. Jamie Lawrence (Miller), an orthopedic surgeon who for the past 10 years has also worked as an expert legal witness.

Lawrence determined Jones’ wrist was broken and she suffered permanent damage because it was not treated as a break.

“An MRI clearly revealed a break in the scaphoid bone,” Lawrence said while pointing to exhibit A, which was a copy of the X-ray. “She will never be able to fully recover because the treatment was so delayed.”

“Congratulations to the team on a great competition,” Mark McCown, Ironton attorney and St. Joe Mock Trial Team legal adviser for the past 18 years, said. “They did a fantastic job defeating Wheelersburg.”

Kegley addressed the teams at the conclusion.

“We saw a lot of good stuff,” Kegley said. “On the opening and closings you all gave us a good development of what the facts were going to be.”

“Your participation shows a level of commitment we don’t see too often,” Buckler said. “Everyone did well.”

Lutz knew prior to the competition defeating Portsmouth wasn’t going to be easy.

“I don’t know if Portsmouth has ever lost,” Lutz said. “We’ve all worked incredibly hard; two hours every day since November practicing for this. It’s a big deal even if we lose.”

“We were only barely beaten by Portsmouth,” McCown said. “According to Court of Appeals Judge Matthew McFarland, who presided over the Portsmouth match, it was the best competition he has ever seen at a district match, and one of the three best he has seen at any level.”