Rebuilding tractors runs in the family 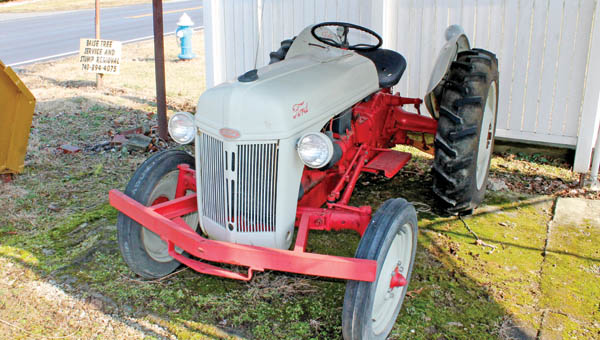 CHESAPEAKE — Clarence Ferguson, owner of Ferguson Farm Implement, has worked with tractors for nearly 50 years at his family-owned business on Township Road 1213.

The business started out across the street at Ferguson’s home, where he enclosed the carport with plastic and began working on tractors, she said. From there, the business moved to a gas station down the street before the current location’s property came up for sale and the building was built by Ferguson from scratch. Ferguson has been in his current location for 30 years.

“I was under ComStock Motors for 20 years,” Clarence Ferguson said. “Then I went on my own.”

Ferguson was running the business under the car port at home for five years, before moving to a gas station down the road for two years and finally building his current building in 1985, he said.

Cricket recalls her dad quitting schools and starting to work on tractors full-time.

“It’s just something he picked up. He loved doing it and it’s how he raised his family and took care of all of us,” she said. “He just started picking it up and learned as he went along.”

“We’ve had people come from Georgia and Alabama to buy tractors from us,” Cricket said. “We also do all the work on the Chesapeake Airport tractor.”

Although Cricket has two other jobs, she has always worked with her father at Ferguson. Her brother and sister have also worked for him as well as her husband who currently works for Ferguson, so tractors are a big part of the family.

Ferguson has two tractors that he built on display at Heritage Farm in Huntington, as well as a 1947 model tractor outside of the Ferguson Farm Implement garage that took two years to complete.

“That is one that I don’t want to sell because my dad built it,” Cricket said. “I got offered $5,000 for it, but we didn’t take it. Everything on it is original and it’s something that we want to keep forever.”

Clarence Ferguson, now 79, doesn’t do as much work as he did, but still comes in to see his customers, Cricket said. His passion is tractors and he loves what he does.

Tax cuts, hikes in Kasich budget to be detailed

COLUMBUS (AP) — The two-year operating budget that Gov. John Kasich has prepared will include a package of tax changes... read more