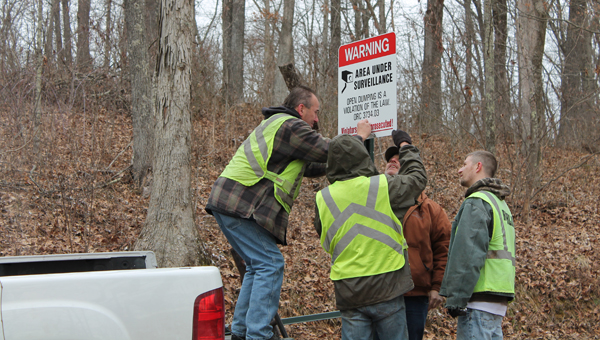 AID TOWNSHIP— The Lawrence Scioto County Solid Waste Management District recently put three signs up in the Wayne National Forest in an effort to stop trash dumping, an ongoing problem in Ohio’s only national forest for many years.

“People from all throughout the county are throwing trash,” Rick McCleese, vice president of Elkins Horse Club and owner of Elkins Horse Camp, said. “We are trying to keep it cleaner around here.”

McCleese’s horse camp and trails are inside the Wayne National Forest and he oftentimes cleans up dumped trash himself, he said.

“We try to keep this clean because we get people from all over the United States and Canada even,” McCleese said. “We want to leave a good impression for these people.”

Couches, chairs, tires, carpeting and construction materials are just a few of the items that are commonly dumped in the forest.

“It gets so bad that there’s sometimes trash blocking roads in the park,” WNF Ranger Chad Fitton said.

Fitton has been with the Ironton Ranger District of the Wayne National Forest since 2006.

The Wayne National Park is in partnership with the Elkins Horse Club and McCleese’s camp.

“We work with the horse club because we don’t have the funding,” Fitton said. “The trash dumps are just so unsightly. We want to show them and the people they bring in the value of a beautiful forest.”

“We are doing everything we can to help stop this problem,” Fitton said. “If we catch someone dumping trash, we would seek the strongest penalty under the judicial system.”

All Seasons owner turns himself in at county jail

He was a couple of hours late, but the owner of a contracting company that left Ironton residents with leaky... read more