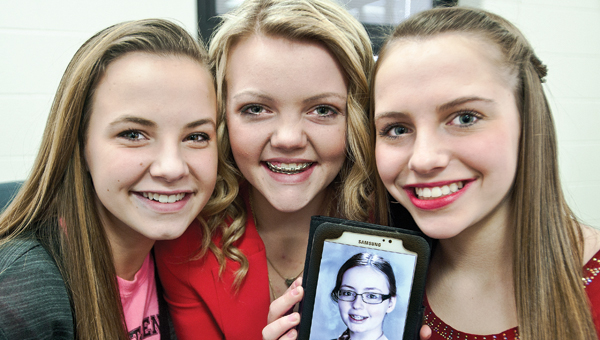 Fairland Middle School students Kelsie Warnock, Emma Conwell and Olivia Roberts, pictured left to right, hold a photo of their friend. Candy passed away from cancer back in July. Today the girls and their fellow students will present a check for $2,000 in honor of Candy to Hospice of Huntington.

PROCTORVILLE — Candy’s Army, Fairland Middle School students and classmates of Candy Haugen who lost her battle with cancer in July, have been doing something every month of the school year to honor Candy.

For the month of January, Candy’s Army, along with help from Fairland West Elementary School raised $2,000 for something tangible to remember her.

“Two thousand was raised to purchase a Laurel Leaf for the Bridge of Caring Donor Wall at Hospice of Huntington,” eighth grade classmate and friend Olivia Roberts said. “That’s where she stayed the last couple days of her life.”

The money was raised in many different ways and lots of students and faculty donated.

“‘Change for Candy’ was by student council,” eighth grade classmate and friend Emma Conwell said. “We collected money at lunch time in her honor.”

Conwell is the president of student council at Fairland Middle as well.

Raising enough for the Laurel Leaf couldn’t have been done without the help from the students at Fairland West Elementary.

Those who knew her say the Laurel Leaf will be a constant reminder of Candy’s positive impact on the community and all of the hard work that Candy’s Army has done in her honor.

“She will be dearly missed,” Roberts said. “But her positive influence on people will be remembered forever.”