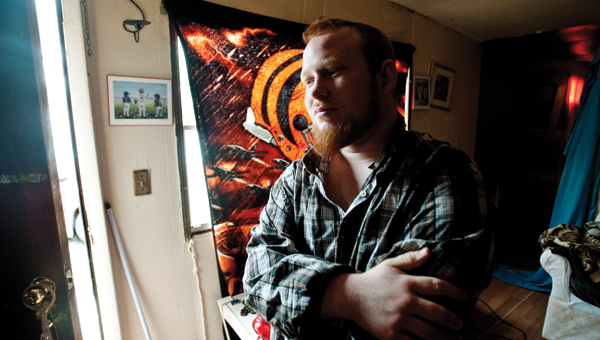 Ryan Luther was one of many neighbors who attempted to help Ashley and her children the morning their trailer caught fire.

SOUTH POINT — The fire at the Gary Malone Mobile Home Park that claimed the lives of a woman and her three children Wednesday morning has shocked the park’s tight-knit community.

“In here, we’re all family,” Tiffany Strange said. “Everyone takes care of everyone else.”

Strange was the neighbor who called 911 after she heard a loud noise and saw flames coming out of the front windows of the Mays mobile home.

“When I moved here, I was homeless,” next door neighbor, Ryan Luther, said. “Ashley was very helpful. You could ask her for anything and she would do anything for anybody. It’s devastating when something like this happens.”

Luther was even a part of Mays’ Christmas this past year.

“I played Santa Claus for her kids,” he said. “They really enjoyed it. That’s the last time that I talked to them because I’ve been busy with work, but it hurts.

“I really feel for the family. The financial needs are tight as it is and now they have to start over. … To see this happen right next door, it hurts.”

Luther has only lived in the park for a couple of months while Strange has lived at Gary Malone for 11 years and knew Mays and her children well.

“They were the sweetest people,” she said. “In the summer when they had their pool up, my kids and all the kids would go over there and play.”

Luther said he understands what the family is going through.

“This kind of thing hits home for me because I lost my dad to a hit and run,” he said. “I can’t relate to a house fire, but I can relate to a loss like this. It’s crazy.”

Extra money from a variety of funds will allow the county to pay off the $165,000 in back medical bills... read more