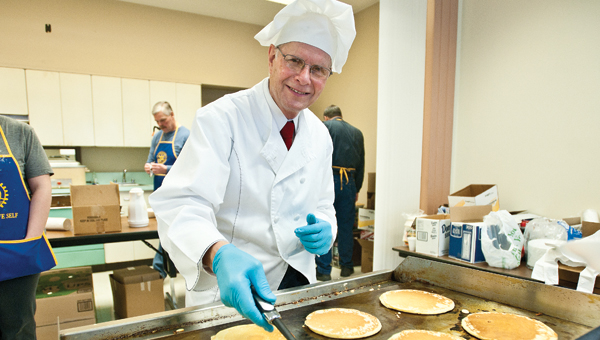 The breakfast is a tradition that started in the 1970s and is still going strong.

“I’ve been coming ever since it started,” Joe Holtzapfel said. “I like meeting everybody because we know everybody.”

The camaraderie the event brings to the community is unquestioned.

“It’s one of those times you can come and visit everyone,” Holtzapfel said. “There’s probably hardly anybody in here I don’t know.”

Bill Lightner feels the same way, as he has also been coming since the event started.

“I’ve been coming so long it’s unreal,” he said. “We come for the fellowship more than anything else.”

Besides the chance for members of the community to get together, the pancakes are pretty popular among breakfast connoisseurs as well.

“The pancakes are always moist,” Sharon Lightner said. “They’re not dried out like when I make them at home.”

The Ironton Rotary Club works hard to be able to put this on for the community every year.

“We get here at 5:30 so we can get the grills hot,” Massie Schemmel, club president, said. “If it wasn’t for Joe Jenkins and John Boyd working their butts off yesterday, we wouldn’t be able to have this.”

Jenkins and Boyd are club members who spent the better part of their Friday getting ready for the breakfast.

“We brought all of the supplies from where we keep them stored,” Boyd said. “We cleaned the floor and everything and picked up the tables and chairs from Ohio University Southern.”

The club supported local businesses for the pancake breakfast as everything was bought at Bartram and Son and the flowers that were for sale were from Weber’s Florist.

“We were looking for something fun to do on Valentine’s Day and wanted to look for a community partner in a local business,” Sallie Schisler, club member, said. “We bought the roses from Weber’s and were able to sell them as a special project for Rotary. We very much appreciate their cooperation.”

Weber’s also donated a flower arrangement that was raffled off.

Along with the Rotary Club members, Boy Scout Troop 103 of Coal Grove volunteered to helped out at the breakfast.

Scioto jail could be used as county jail

Moving the substandard county jail to a facility in Franklin Furnace is still on the front burner. But if that... read more