City, villages doing best to keep up with road conditions 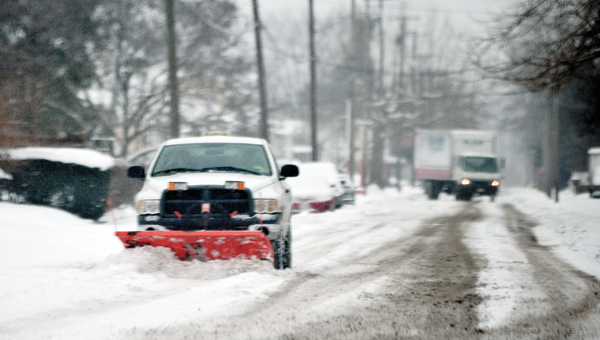 Road crews make their way down Pike Street in Coal Grove as they work to clear roads Wednesday.

As the snow falls and temperatures drop, city workers are working tirelessly to keep up with the dangerous road conditions.

“This is the most amount of snow we’ve seen in several years,” Ironton Mayor Rick Blankenship, said. “When citizens aren’t used to driving in it, it can be very dangerous.”

In Ironton, as soon as the snow started coming down Monday, the main roads were the main concern.

“We are trying to get the main throughways cleared such as Park Avenue and Third Street,” Blankenship said. “There’s no way we can get to all of the side streets too.”

With the blizzard on Monday, the sun out Tuesday and more snow on Wednesday, keeping up the main streets are the No. 1 priority.

“When it thaws and then freezes it makes it worse,” Blankenship said. “We ask the residents to be patient with us as we go through the storm just like they do. It’s a dangerous job and we’re doing the best we can.”

The main roads in South Point were cleared on Tuesday, South Point Mayor, Ron West, said. If the snow gets any deeper, they will be back out to clear the roads again, he added.

In Chesapeake, travel may be a little harder.

“We are dealing with it like everyone else is,” Chesapeake Mayor Dick Gilpin, said. “We don’t have the best snow removal equipment because we don’t get snow like this often.”

Chesapeake has only one truck of its own.

“The state highway takes care of the main roads in Chesapeake, but Third Avenue is spotty,” Gilpin said. “The side streets are a problem, just like every other town. This is the first time we’ve had to put salt down for the winter, so we’ve been fortunate. We are doing the best we can.”

Proctorville receives help from Union Township and the county for their roads.

“Union Township came through and plowed some of the back streets,” Proctorville Mayor Rick Dunfee, said. “The county plows the main street for us (State Route 7). We don’t have a plow, so we have to do what we have to do.”

With the uncertain driving conditions, it is advised to only travel if needed.

“If you don’t have to be out on the streets, we encourage you not to,” Blankenship said.

Gilpin offered some advice for those who do have to leave.

Colleagues recall Deer’s contributions to county   A leading light in the county’s historical society is being remembered for her... read more