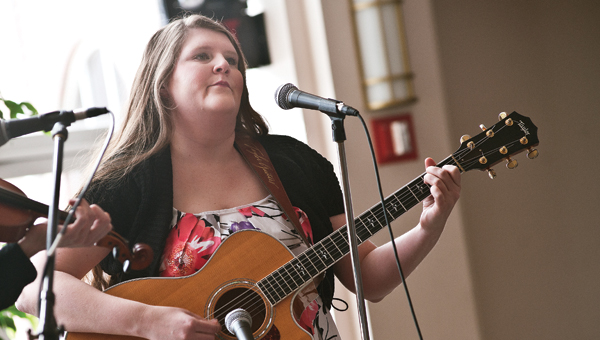 The couple and musical duet of Michael Garvin and Janet Thompson that make up Blue Vine, out of Ashland, were this week’s Brown Bag concert performance at Ohio University Southern.

Garvin plays the fiddle and guitar while Thompson plays banjo, guitar and piano, as well as vocals.

The name Blue Vine symbolizes the kind of music that the duet plays.

“Blue represents our state of Kentucky,” Thompson said. “And the vine part is reaching out to different genres of music.”

Garvin is also a member of his all-family band Kentucky Memories and has a business in Ashland where he gives lessons as well as instrument repairs and appraisals.

“We’ve only been Blue Vine for three years. I didn’t even play anything until I met him,” Thompson said. “He makes anybody sound good when he plays with you and that’s a huge advantage. He’s very versatile and knows a lot of different styles of music. Nothing fazes him.”

Blue Vine plays at many locations around the Tri-State such as the OUS brown bag concerts, coffee houses and even at Relay for Life one year.

The Russell High School jazz band will perform at the next Brown Bag concert on March 11 followed by Garvin’s other band, Kentucky Memories, on March 25 and Woodstock on April 8.

All Brown Bag concerts are at noon in the Mains Rotunda of the Riffe Center at OUS-Itonron.

Move will be made in steps   The lease was approved. Now comes the transition of the county jail down... read more