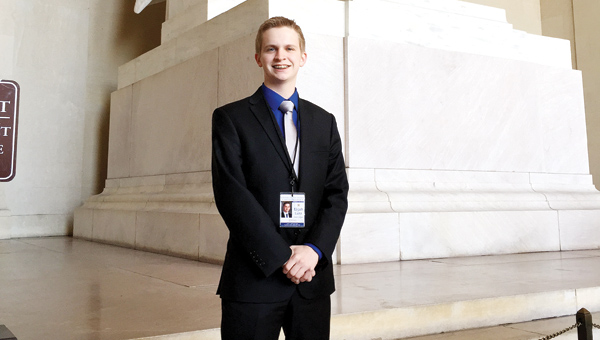 Elijah Lutz visits the Lincoln Memorial during his trip.

St. Joseph High School senior and Ironton resident Elijah Lutz said that politics have been a big interest of his since he was a young kid, and recently he got to spend a week in Washington D.C. through the U.S. Senate Youth Program operated through the Hearst Foundation.

“It was the best week of my life and the busiest week of my life,” he said. “There was something everyday with no free time. We had speakers, visited different buildings and monuments. For a political junkie like me, I was in heaven for the entire week.”

Lutz, a member of the American Legion Buckeye Boys State, applied to take the comprehensive test in order for this opportunity and was selected as a semi-finalist. All of the semi-finalists were given the opportunity to take the test, which was then graded by the State Department of Education. Students earning the two highest scores from each state along with Washington D.C. and the Department of Defense took the trip to Washington D.C. for a total of 104 delegates in the group.

“I’ve always found politics to be interesting for some reason,” Lutz said. “I’ve always known I wanted to be in government.”

Helping people is what Lutz really enjoys about politics, he said.

“You can help so many people out through public service. It’s not about self-service, it’s about helping others,” he said. “If you’re not corrupt, you help others and that’s what I want to do.”

The group of 104 delegates he was with is what he will remember the most from the week, as they all shared an interest in politics, he said.

Lutz is undecided about where he will attend college in the fall, but he does know that he will study political science wherever he ends up and plans to attend law school after that.

“I want to eventually become a judge,” he said. “The big goal is to eventually serve on the Supreme Court, either in Ohio or the United States Supreme Court. The meeting we had with Justice Steven Breyer really stood out to me because I want to be where he is someday.”