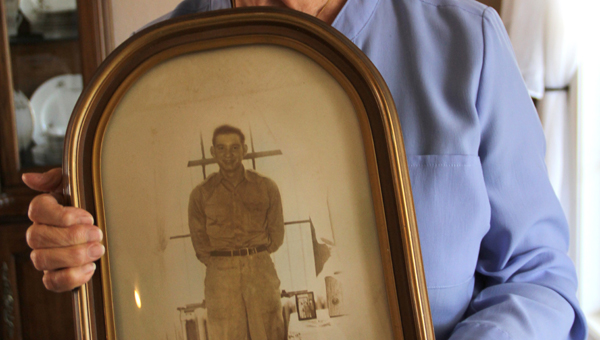 Courtesy of The Sentinel-Record/Beth Bright
Phyllis Dornan holds a photo of her brother, Sgt. 1st Class Earl Hilgenberg, who was reported missing in action by the United States Army on Nov. 2, 1950. In October, Dornan received a call that her brother’s remains had been recovered.

PEARCY, Ark. — When Phyllis Dornan received a phone call in October, she got some closure on the lifelong mystery in her family. The remains of her brother, Ironton native and Sgt. 1st Class Earl E. Hilgenberg had been identified 64 years after he was reported missing in action by the U.S. Army.

Hilgenberg was serving in the Korean War and was taken a prisoner of war on Nov. 2, 1950 near Unsan, North Korea. He died March 18, 1951 while a prisoner.

“He was near the border trying to help South Korea descend to prevent it being taken over by communist countries,” Dornan said. “They were trying to defend that border.”

Dornan, who lives in Arkansas, is the only remaining of 12 siblings.

Several years ago, two other brothers sent their DNA in an attempt to hopefully find a match, and last fall, she got a phone call saying that Earl’s remains were identified, she said.

There were 34 boxes believed to contain the remains of unidentified Korean War U.S. servicemen from a location corresponding with War Camp 5, where Hilgenberg was, that were unilaterally turned over by the Democratic People’s Republic of Korea on Dec. 21, 1993.

The U.S. Army reported Hilgenberg MIA “as a result of combat actions between the CPVF and the 8th Cavalry in the vicinity of Unsan, D.P.R.K.,” according to a May 19, 2014 historical report by the Joint POW/MIA Accounting Command. Hilgenberg was a member of Company E, 2nd Battalion, 8th Cavalry Regiment, 1st Cavalry Division.

The report also said that according to repatriates of War Camp 5, Hilgenberg died of pneumonia at the camp.

Recently, Dornan was presented with the medals.

The remains of Hilgenberg will be brought back home when he is buried at the family’s cemetery on State Route 378 in Aid on Friday, March 27.

There will be a military memorial service at 1 p.m. on Friday at Phillips Funeral Home in Ironton with visitation an hour before. He will then be buried at the Hilgenberg family cemetery next to his parents and siblings, she said.

“It was an unbelievable shock that they had identified him,” Dornan said. “Needless to say, it’s very good to have some closure after all these years.”

KITTS HILL — A 17-year-old juvenile has been charged with a misdemeanor count of cruelty to animals, according to Lawrence... read more