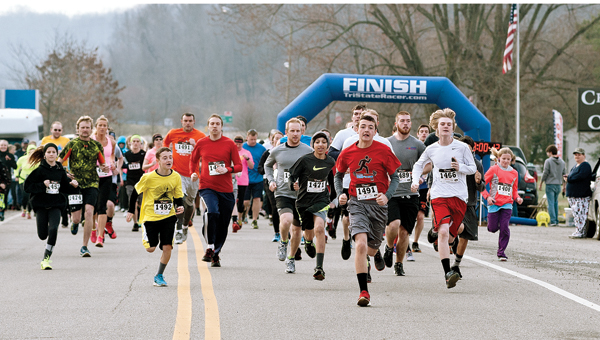 At the starting line, 5K participants take off Saturday morning during the Lawrence County Board of Developmental Disabilities 5K run/walk for awareness.

SOUTH POINT— BOOM! As soon as the starting pistol fired, participants were off at the fifth annual Developmental Disabilities 5K hosted by Tri-State Racer at The Point industrial park.

“The first year that we had this, it was in Coal Grove, but we decided to move it to South Point the last four,” Tim Nunnery, personnel director of the Lawrence County Board of Developmental Disabilities, said. “The park is usually pretty empty and there’s no issues with traffic. We have a great turnout every year here.”

More than 180 participants registered for the race totaling $2,855 raised with portions of all entry fees going toward developmental disabilities programs. Pre-registrants paid $15 and got a T-shirt while those who registered the day of the race paid $20.

The event brought out participants of all ages for the one cause of raising awareness for developmental disabilities.

“I think it’s awesome that they do this for different organizations like awareness for developmental disabilities,” participant Paige Ellswick, of Ashland, said. “It gets a lot of people out because a lot of people love to do stuff like this.”

Ellswick participated, but she was also with the nursing program at Collin’s Career Center that volunteered during the event.

While many participants enjoy the exercise aspect of a 5K, participating for the awareness of developmental disabilities adds to the meaning.

“I like the community awareness and getting other people out and involved,” first time participant Ron Stableton, said. “I like how the money raised goes back into the community in the form of developmental disabilities awareness.”

“I enjoy running for the health and keeping the weight down,” he said. “I pick and choose the races that I run depending on what it’s for. I want to help out however I can.”

This was Barker’s third year participating in the event.

“We have about 20 sponsors that really help support this and a lot of people that come out and participate,” Nunnery said. “If they keep showing up for it, we’ll keep doing it.”

While the Republican Central Committee will appoint the successor of Lawrence County Engineer Doug Cade, the county commission will name... read more