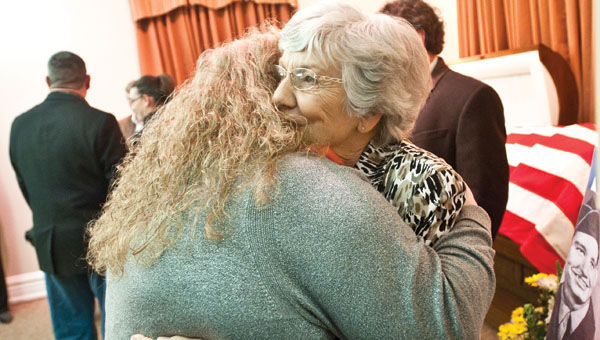 Phyllis Dornon is comforted by friends and family during her brother Earl Hilgenberg’s memorial service on Friday. Hilgenberg died a prisoner of war during the Korean War. His remains were identified and returned to his family after more than 60 years.

Hilgenberg’s remains were identified this past fall, 64 years after being reported missing in action by the U.S. Army.

“Seeing all of these people here is amazing in itself. These are people who most of them just knew the rest of his family because he was an older child,” Phyllis Dornon, Hilgenberg’s sister and last remaining sibling, said. “I’m proud of Lawrence County and the people of Lawrence County for doing everything that they did.”

An American flag was placed over the casket where Hilgenberg’s uniform was displayed at the funeral home, along with his awards, pictures and an abundance of flowers.

Phyllis Dornon, her family and members of the Patriot Guard met at the funeral home Wednesday evening and went to Yeager Airport in Charleston, West Virginia, where Hilgenberg’s remains were being brought in from Honolulu, Hawaii.

Hilgenberg’s remains got to Charleston at 10:30 p.m. Wednesday where the Army Honor Guard was at the airport as well.

“When we got back across the Ohio border, we were met by about 17 Ohio law enforcement cruisers that escorted us back,” Roush said.

The Patriot Guard does this for veterans, serviceman, law enforcement officers or first responders at the family’s request.

“That was one of the most amazing things that I’ve ever seen in my life,” Phyllis Dornon said. “Everything went smoothly and the Patriot Guard did a great job. It was just an amazing thing to see.”

At the funeral service, all of the Patriot Guard members lined up and each paid their respect to their fallen brother before getting ready to escort the funeral procession.

Army veteran and pastor of South Point Church of God, Ron Musser, then went on to lead the service, where he stressed the importance of hope and how much it means. He talked about being away from home and thinking about home when you are away, hoping that you will return soon, because there is nothing like it.

Musser mentioned a letter than Hilgenberg had written to his brother in 1950 inquiring about the price of a 1942 Ford convertible, which had to be red. He had hope, Musser said.

“I was pastor of Chesapeake Church of the Nazarene when I had a South Korean in my church for one year,” Musser said. “The first thing he asked me when he came to the church, he said, ‘Do you have any Korean veterans in this church?’ I said, I sure do. He said, ‘Could you point them out to me, I’d like to thank them for my freedom.’ He was serious. He was very serious about his freedom.”

Musser went on to talk about how this man and South Korea had hope that they would gain their freedom from the north. Hilgenberg helped him get his freedom, Musser said.

“To me, today is not a sad time. It’s a glad time that our brother is back in the U.S.,” Musser said. “I know very little about this brother, but I am here today to honor him.”

After a prayer and a few words from Musser, Phyllis was presented with the folded flag to remember her brother.

“This means a lot and the turnout is tremendous,” Barry Dornon, Phyllis’ son, said. “I never met him, but heard my whole life that my mom had lost a brother in Korea. I didn’t know that he died in a prison camp, but it is great to finally have some closure in our family.”

Church welcomes all for celebration

It’s hard to attend a party if you don’t know you are invited. I want to make sure that you... read more