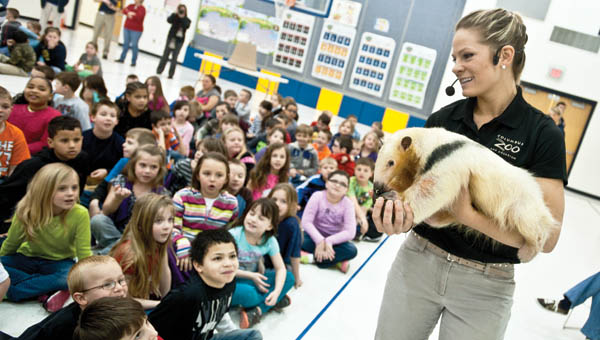 BURLINGTON — Interesting visitors from all over the world were at Burlington Elementary School as part of the Habitat Heroes show put on by the Columbus Zoo Friday.

The students got to see and learn about several different animals including a Laughing Kookaburra bird and an echidna from Australia, a Harris’s Hawk from the desert that flew right over the top of the children, a tamandua from the rainforest, a striped skunk and baby alligator from North America, hissing cockroaches from Madagascar and a bush baby and baby cheetah from Africa.

Along with seeing each of those animal and getting to interact with the Madagascar Hissing cockroaches, the students learned about where each animal is found in the wild, the kind of habitat each lives in and some facts about each one.

“The kids were so excited,” Lorie Donahoe, third grade language arts teacher and assembly coordinator, said. “All week we talked about endangered cats and they were just so excited to see all of the animals. This really showed the kids real live animals that they learned about and brought it to life for them.”

The assembly was split up into two shows as kindergarteners through second grade had one followed by the third through fifth graders.

Before leaving the assembly, each student got to line up and pet the baby alligator.

“We’re in a high poverty area so a lot of the kids don’t get to do these kinds of things,” Mylissa Bentley, principal, said. “We are so glad that the Columbus Zoo was able to come and do this for them.”

Ruling may change how EPA issues limits on pollution