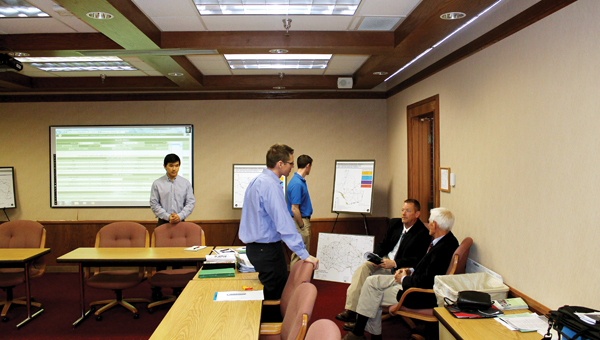 ODOT District 9 planning engineer Max Francis, Ironton Mayor Rich Blankenship and ODOT District 9 deputy director Vaughn Wilson talk about some of the plans in store for Lawrence County and the rest of the district.

District 9 of the Ohio Department of Transportation hosted an open house Tuesday morning at Ohio University Southern that gave residents a chance to see what projects are coming up in the next four years as part of the State Transportation Improvement Program (STIP).

“Every other year we are required to send the state’s plans to the federal government,” Kathleen Fuller, ODOT public information officer of District 9, said. “We have a four-year work plan and we show people what we have proposed. Things can change due to funding or design issues and things like that, but this gives them a general idea of what we have planned for the future.”

ODOT’s fiscal year begins on July 1, so all of the proposed plans for each year aren’t scheduled until after that date.

“We are giving people an idea of where and when projects are going to be and as much information that we can tell them about each one,” Fuller said. “If people see this and have questions, concerns or comments about certain things, we need to hear that.”

Available at the open house were packets that outline each proposed project of each county in District 9 from 2016 through 2019 as well as another packet that lists all of the current projects that are going on this year.

Seven projects are planned for 2017, six for 2018 and five for 2019, although everything is subject to change, Fuller said.

“Most of the projects set for the next two years won’t change, but past that it’s harder to determine funding,” Max Francis, ODOT District 9 planning engineer, said. “Every district has its own set of projects and programs that it administers. Most have both federal and state money involved in them, but there are a lot of variables.”

To find out the full list of upcoming projects, ask questions, voice concerns or for more information, contact the ODOT District 9 office at 740-773-2691.

Deputy’s dedication, humor remembered by colleagues Area law enforcement is remembering one of their own following the sudden death of... read more