‘For what it’s worth’ 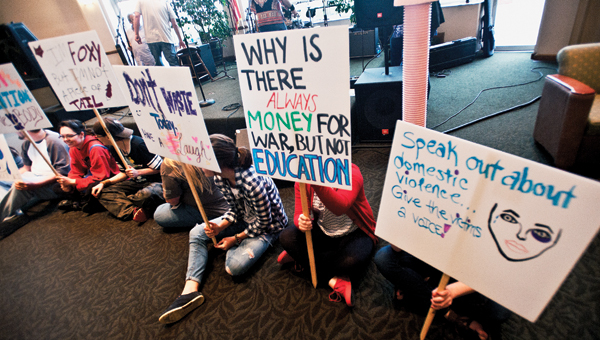 A “live protest” is staged during Protest Through Art and Music portion of the 2015 Kennedy Lecture Series Wednesday at Ohio University Southern.

Art, music and social change were all brought together Wednesday afternoon in the Mains Rotunda at Ohio University Southern as part of the second year of the Kennedy Lecture Series.

“We wanted to make this all about the students,” Tom Suter, OUS art lecturer, said. “The students engaged in art work that deals with social issues or inequalities.”

Besides the art work on display, two large canvases were set up on the side for anyone to write something or draw something if people wanted to express themselves.

From 2-3 p.m., OUS students, faculty and students from Cabell Midland High School participated in a protest reenactment with signs that were made dealing with social issues that were important to each individual as Woodstock Nation played “For What It’s Worth,” by Buffalo Springfield.

“This was just about using any form of art as a way to express certain ideologies or things that are important to you,” Callihan said. “My content was speaking against things that I think are wrong in society. Basically, I touched on certain things that some people are afraid to address.”

The feminist art exhibit program of the series took place from 3:30-4:30 p.m. where Suter and Katherine Cox from the Huntington Museum of Art led a panel discussion and dialogue designed to capture the spirit of the Feminist Art Movement in America.

The final program of the Kennedy Lecture Series will the feminist art exhibit for the women’s conference Friday from 2-3 p.m. at the Ohio University Southern Proctorville Center.

A Chesapeake man will spend time in prison and pay back more than $5,000 in restitution to businesses he broke... read more