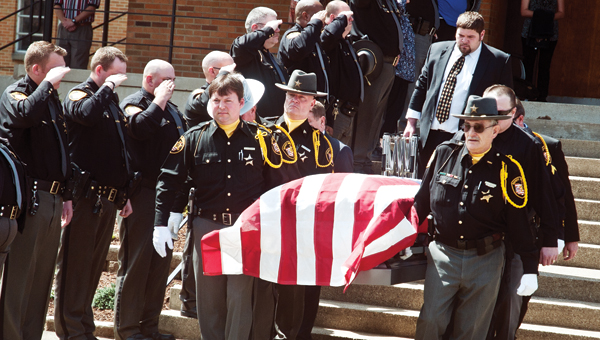 Deputies from the Lawrence County Sheriff’s Office escort the casket of Deputy Sgt. Randell Rogers from the First Baptist Church on Friday.

The Patriot Guard in jeans and T-shirts, American flags unfurled by their side, stood at attention in front of First Baptist Church in Ironton at 9 a.m. Friday.

As dark clouds turned into drizzling rain they kept watch while the community came to pay tribute to Lawrence County Deputy Sgt. Randell Rogers, whose body lay in state at the foot of the chancel steps of the church.

Rogers, a Marine Corps veteran and 33-year veteran with the sheriff’s office, died suddenly on Tuesday at the age of 54.

Just outside the church in Rogers’ K-9 cruiser, sat the German shepherd Max, his partner for a decade, whose muffled barks could be heard through the window grill.

At noon as the last visitors paid their respects to Rogers’ wife, Debbie, dressed in her deputy uniform, and their daughter, Amanda, standing near the casket, the church bells tolled the hour.

Then, an honor guard from the sheriff’s office marched from the side aisle of the church to the casket and saluted.

After they filed out, members of area law enforcement, led by Lawrence County Sheriff Deputy Jeff Lawless, came down the center aisle. Lawless made a slow-motion salute to the man he once rode with as a partner. Just as he turned to take his place in the front pew, Lawless fingered the white satin of the casket in a mute farewell.

Deputies, troopers, detectives and officers filled 15 pews in the church. As the last man saluted his colleague, deputy Steve Cartmel called out, “Officers, be seated.”

Walking up to the pulpit was former Ironton Police Chief Jim Carey, who would officiate at the funeral.

Rogers was remembered as a fearless officer, one partners always counted on for backup.

“Randy Rogers set an example for you to follow,” Carey said. “Follow the example he has set for you. Be the policemen he would want you to be.”

Lawless then took Carey’s place in front of the church, recalling the first time they teamed up: Lawless, a rookie. Rogers with a few more years under his belt. The call was at Montroso Bar on Lane Ridge, where not a few imbibers had decided they’d rather fight than drink. The two lawmen walked in. Rogers turned to Lawless:

With his voice breaking, Lawless announced that day Max would be retired from service, saying the county has lost two good officers.

“Rest In Peace, Randy Rogers, my brother,” Lawless said. “I love you.”

As those in the church went up to the casket to pay their final respects, officers lined the front steps into the church and the street outside. Other members of the community stood 10 deep nearby waiting for the flag-draped casket to be carried to the hearse.

When the honor guard, acting as pallbearers, was near the door, Cartmel called out, “Officers, Attention.”

All hands shot up in a final salute while the casket was placed into the light gray hearse, a Marine Corps medallion on the door.

As the hearse pulled into the cortege of police and sheriff’s cruisers and fire trucks that would make a final journey around the city, only one sound could be heard — Max saying goodbye to his master, his friend.