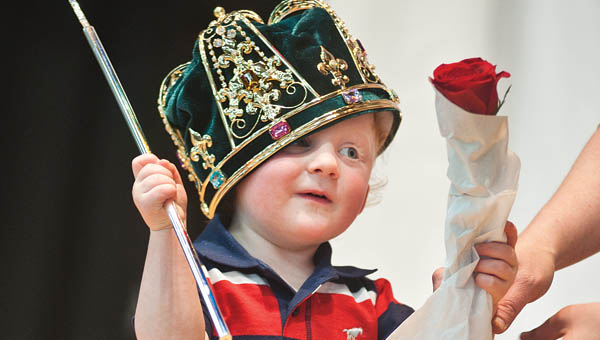 Sean Gails is Mini Mr. upon being nominated during the Miss Lawrence County Pageant at Dawson-Bryant High School Saturday.

COAL GROVE — Many years have passed since a Miss Lawrence County was crowned, but that all changed Saturday afternoon as the Dawson-Bryant High School prom committee brought back a tradition that has been lost in the county.

“All of the contestants presented themselves so well,” DeAnna Holliday, Dawson-Bryant board member and former Mrs. Ohio, said. “The judges certainly had a hard time on their hands.”

Holliday assisted with the event, donated all of the crowns, sashes and flowers and got the pageant’s judges. Judging were Deborah Spain, national pageant director for Dreamworld Pageants, Amy Napier, cosmetologist at Charisma Salon and Spa in Ashland and Lauryn Meadows, who has helped with the Mrs. Ohio campaign.

“This was a fundraiser to keep the cost of prom low,” Kim Ritchie, Dawson-Bryant High School teacher and junior class adviser, said. “Coming from such a small school, sometimes it’s hard to raise money.”

Ritchie said that the pageant raised $1,500, which will help pay for the meal at Texas Road House, dessert bar, candy bar, and food and prizes at the after prom, that all of the students will get with prom tickets of $30 a couple.

“The class officers on the prom committee had all the responsibility of doing this,” Ritchie said. “They’ve been the best group this year and have worked so hard.”

Besides the over 106 miles of Wayne National Forest designated hiking trails that are open year round, the other 338... read more