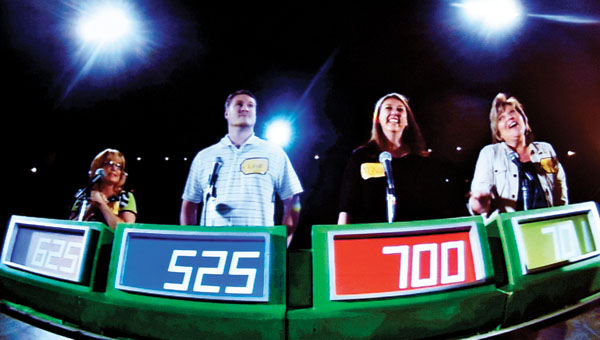 The Price is Right Live big hit for sold out PAC

ASHLAND, Ky. — For several hours in front of the Paramount Arts Center, hundreds waited in line that went around the back of the building and down Carter Avenue to register for the Price is Right Live, a live traveling version of America’s longest running game show, in hopes of hearing their name called to “come on down!”

When the doors to the theater were finally opened in the lobby, those who had already registered rushed in to their seats as one large screen on each side of the stage played Price is Right trivia until the start of the show while music played. The crowd also kept busy for a while before the show by doing the wave. When the show finally began, the excitement could not be contained.

Host Todd Newton got the crowd going as names were chosen at random to be a part of Contestant’s Row to bid prices of items for a chance to play all of the classic games on the regular show.

The games that were played included Punch-a-Bunch, Cliff Hangers, Any Number, Hole in One or Two, Big Wheel , Plinko and more.

Tyler Hatten, of Kenova, West Virginia, said he didn’t even know about the show until a couple hours before, when he, his wife and sister-in-law decided to get tickets. Hatten ended up leaving with a Las Vegas vacation for two for four days and three nights at the MGM Grand after guessing the correct numbers for the vacation on Any Number.

“I didn’t think I would even get picked, let alone win,” he said. “It was great. I was ecstatic. Ever since I’ve been married, we’ve never taken a honeymoon or had time for a vacation because I was overseas. I’m just so excited.”

Other prizes won include a 3D Smart TV, PlayStation 4 and money. Instant winners were chosen from the audience in between games and won $25 Subway and Target gift cards.

This was the first interactive show that the Paramount Arts Center has hosted, but it was very popular with the audience.

“I usually miss the show when it’s on TV because I work, but I really enjoy it and like the games,” Johnda Cantrell of Flatwoods, Kentucky, said. “It would have been better if I would have won something, but I would come to this again.”Come on down!

This weekend I went to the National Rifle Association (NRA) convention in Nashville, Tennessee, my hometown. I’m an editorial cartoonist;... read more